Mercedes-Benz has issued an internal announcement to U.S. dealers (via C450 AMG) that confirms CarPlay will be supported in a number of 2016 model year vehicles starting with December 1, 2015 or January 8, 2016 production or later. 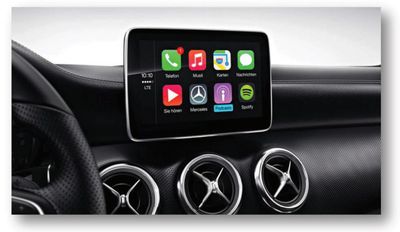 CarPlay can be controlled using the central controller or touchpad, if equipped, on supported Mercedes-Benz vehicles. Siri voice commands can be activated by pressing the voice control button on the steering wheel.

CarPlay works with compatible iPhones plugged into a specific USB port on supported Mercedes-Benz vehicles, labeled "2" below on the right.

Apple CarPlay® will be a completely different interface than the customary Mercedes-Benz infotainment. The customer will not be able to use the Mercedes-Benz headunit functions at the same time as CarPlay®. For example, use of the Spotify app cannot be done simultaneously with COMAND Navigation.

CarPlay is available in 2016 CLA, GLA and B-Class vehicles with December 1, 2015 production or later as a standalone $350 package or "Multimedia Package with Smartphone Integration" upgrade.

CarPlay is or will soon be available in a wide range of 2016 U.S. vehicles from Audi, Buick, Cadillac, Chevrolet, Ferrari, GMC, Honda, Hyundai, Kia, Mercedes-Benz, Mitsubishi, Porsche, Volkswagen and Volvo. Apple lists over a dozen other committed CarPlay partners on its website.

CarPlay is compatible with the iPhone 5 or later running iOS 8 or newer.

bryanck
I just bought a VW with CarPlay. It works really well, better than I expected! Glad I waited for a car with it. It will future proof the infotainment to some extent.
Score: 3 Votes (Like | Disagree)

$350 for the pleasure of plugging in my iPhone
Score: 3 Votes (Like | Disagree)

b1wils1
Why are we still plugging stuff in?
Score: 3 Votes (Like | Disagree)

tbobmccoy
So nice of them to exclude the low end models like the C class. I used to own an SLK, also excluded. Thanks, Mercedes, for being out to touch with the youth and forward progress. ::eyeroll::
Score: 2 Votes (Like | Disagree)

NachoGrande
dang that screen is ugly? Is that some kind of mock up..
Score: 2 Votes (Like | Disagree)

McTaste
BMW is so far ahead of every other manufacturer in terms of infotainment technology / software. That LCD in the MB looks like garbage, as does the interior.