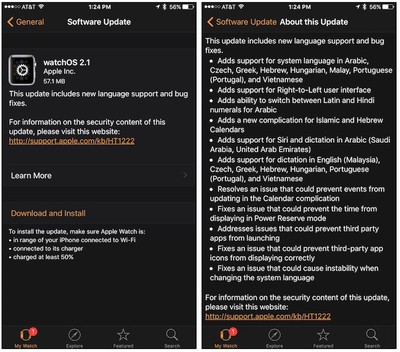 testcard
Got confused by all the updates today. Now running watchOS 2.1 on my MacBook Air. Does that sound right?
Score: 31 Votes (Like | Disagree)

fixes 3rd party apps not installing and not showing an icon is big.
Score: 10 Votes (Like | Disagree)

Mascots
Here's to hoping they eliminated the lag when attempting to dictate anything.

IMO the most notable bug introduced in 2.0
Score: 8 Votes (Like | Disagree)

macduke
My favorite fix in the list is "Addresses issues that could prevent third party apps from launching." This is my #1 problem with the Watch right now. Fix this and I'm much happier with the device. Third party apps are still a pain point on the device. Many of them, even after being updated for Watch OS 2, are extremely slow to load or don't load at all. Sometimes I'm not sure which is going on, and other times it will crash back to the watch face when trying for a while. Please, please let this fix that!
Score: 7 Votes (Like | Disagree)

Thursday May 13, 2021 10:32 pm PDT by Sami Fathi
A new rumor suggests that Apple will announce the third-generation AirPods and the recently rumored HiFi, or high-fidelity Apple Music tier, on Tuesday, May 18, via a press release on its website. The new rumor comes from Apple YouTuber Luke Miani who shared the alleged exclusive news with the AppleTrack website. According to the YouTuber, Apple plans to release the next-generation AirPods...
Read Full Article • 145 comments