A new collection of 50 music videos by The Beatles has hit the iTunes Store today and comes packed in with remastered versions of the band's most popular singles along with a sampling of "mini-movies" the quartet made together (via MacNews). The $26.99 collection, dubbed The Beatles: 1+, is divided up into 27 music videos of the group's #1 hit singles from the United Kingdom and United States, as well as 23 alternate versions of some of the songs. 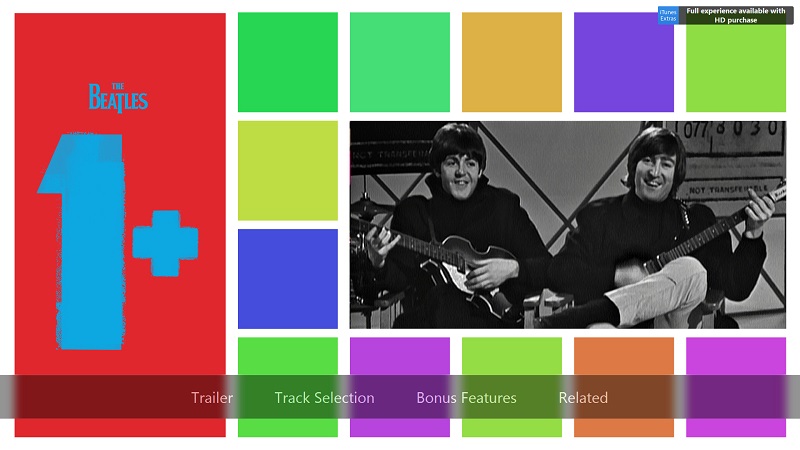 After The Beatles stopped touring, and because travelling around the globe to promote new releases was impossible, they increasingly made what could be described as “mini movies”. These pioneering promotional films and videos helped to define the way we have come to watch music. The Beatles 1+ features all of their 27 #1, UK and US singles as beautifully restored videos for each song, along with 23 alternate versions, as well as rarely seen and newly restored films and videos of additional songs.

The restored videos and audio mixes were produced from the classic analogue tapes made at Abbey Road Studios, and even include audio commentary and introductions by Paul McCartney and Ringo Starr. Fans who purchase the collection will also receive a digital illustrated art book with 113 pages of details and notes about each of the hit songs found in the 1+ collection.

Although Apple and The Beatles were initially in disagreement on the exact terms of releasing the band's popular oeuvre onto the iTunes Store, the eventual digital release of their albums saw impressive sales numbers in the months afterwards. The band's music has yet to make its way onto Apple Music, but Apple has curated a few Beatles-themed radio stations, including a track list of the band members' alternative work and some of the more popular Beatles tracks sung by other artists.


Oh boy...did you just call The Beatles "a bunch of retired musicians" ?

Regardless, I can assure you that this annoying thing does not apply to many.
E.g. not even one of today's bands and musicians will be able to sell today's music a few years from now, hence claim money from their sales. So, let's call this specific "bunch of retired musicians"...an exception, shall we ?
Rating: 15 Votes


Yep "boyband crap" like Barbershop Quartets, Folk song groups, many Motown groups etc. Do you realize how ridiculous such a comment is and how it sounds like one can't get beyond their own moment in time. Rather shallow and sorry, more than a touch ignorant. One need not like the Beatles to know the difference between a fabricated band and a real band. I suppose we live in an age of self involvement and no concept of facts or history.
Rating: 14 Votes


2 out of 4 of them are dead. Neither of the remaining Beatles need the money nor do they own the entire catalogue of their own music. Might I suggest you speak from experience and wisdom rather than...
Rating: 12 Votes

And why is that disgusting?
Rating: 12 Votes


You realize that whatever you listen to right now was almost certainly influenced by the Beatles, right?
Rating: 8 Votes

xlii
The Beatles broke up about 45 years ago. Forty five years from now how may of the music groups active today will still be relevant? Elvis, Bob Dylan, The Beatles and may others from the 50s - 70s show us that true talent will survive the years.
Rating: 8 Votes

The Beatles broke up about 45 years ago. Forty five years from now how may of the music groups active today will still be relevant? Elvis, Bob Dylan, The Beatles and may others from the 50s - 70s show us that true talent will survive the years.


Amen! I can't think of any modern act that will still be relevant 10 yrs from now, that alone 20 or 30 yrs. Especially considering how fickle and shallow today's "music fans" are. I've officially turned into my parents,
Rating: 8 Votes

2457282
I am absolutely astounded at the number of negative comments about the Beatles. One of the best bands in history. Influencers of so much music. Even if you do not like their music, to not recognize the fact of their success or influence is strange (it was the nicest word I could think of). And they were by far the favorite of one Steve Jobs. He longed to get them on iTunes for years.
Rating: 7 Votes


You're probably one of those people who think Kanye and Rhianna discovered Paul McCarthy. And yeah, god forbid people want to make money from their work, no matter when they created it. God forbid, FORBID! FOOOOOOOOORRRRRRRRBIIIIID!
Rating: 6 Votes

malexandria
The "surprising" amount of hatred and ignorance in this thread, sadly doesn't surprise me.
Rating: 6 Votes
[ Read All Comments ]