Nuance Communications today announced the launch of its voice dictation and productivity app, Dragon Anywhere, for iOS devices. Although the app includes a bevy of document management and enterprise-focused features, its main selling point is its continuous, cloud-based dictation that lets users create and edit documents without a time or length limit set in place. 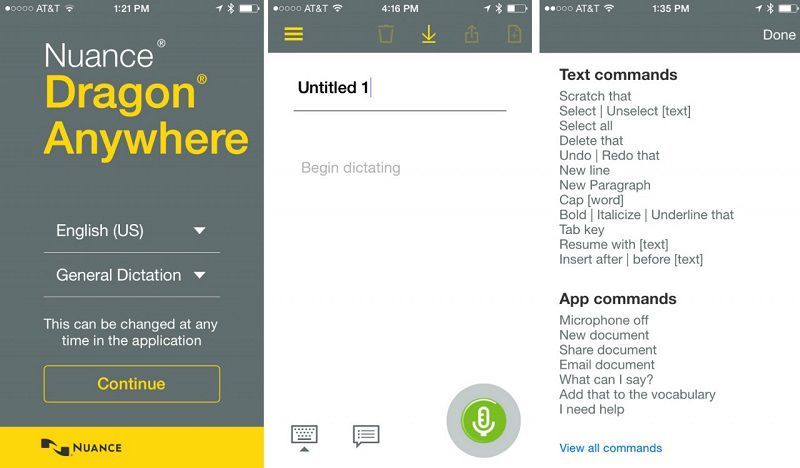 The company positions Dragon Anywhere as an ideal alternative for professionals often working outside of an office, since the software allows them full editing, formatting, and distribution tools right from their phone. Although it should be noted that even when out in the field, an internet or cellular connection is required at all times for the dictation software to function.

The app extends its voice dictation beyond document creation, as well, letting users navigate the UI or even share documents to Dropbox and Evernote using only their voice. The video below shows off Nuance's voice dictation software in greater detail.


Dragon Anywhere also includes a customization suite for its dictation awareness, letting businesses enter personal and customized phrases to be sure the software picks up on everything said by the user. All saved settings will also sync between iOS and the company's supported Mac and PC apps, as well.

Nuance offers Dragon Anywhere as a three-tiered subscription-based service, with 1 month ($15), 3 months ($40), and 12 months ($150) available as options to those interested, along with a one week free trial to test out its features beforehand.

Before I pony up any money or provide (financial) information to that company... I'll have lunch with the devil.

rdlink
I'll take a look, but I think that Siri dictation has caused that ship to sail.
Rating: 1 Votes

cmwade77
Umm, what's the point? Both iOS and Android have very capable voice dictation that don't cost anything extra to use.
Rating: 1 Votes
[ Read All Comments ]