Target is hosting a one-day Early Access sale ahead of the Black Friday shopping holiday, making some of its most appealing Black Friday deals available early. Deals are available in Target retail stores and online on Wednesday, November 25. 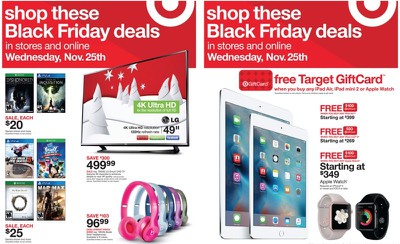 With the purchase of an original iPad Air, Target is offering customers a $100 Target gift card. Target carries several original iPad Air models, with prices that start at $399 for the 16GB Wi-Fi only version.

The iPad mini 2, priced starting at $269 for a 16GB Wi-Fi only version, is also available with a free $80 Target gift card with purchase. On Thursday and Friday, Target will have similar deals on the iPad Air 2 and the iPad mini 4, Apple's more recent tablets.

Beats Solo2 headphones (wired version) are available for $96.99, which is a discount of $103 and one of the best deals that will be available this holiday season.

Starting later this afternoon and tomorrow, dozens of other retailers will be offering Black Friday deals with discounts on a wide range of Apple products. Make sure to check out our dedicated Black Friday roundup to find the best deals that will be available this week.

iabacus
I'm amazed that 4K tv's are so cheap already. But still no need to own one.
Score: 2 Votes (Like | Disagree)

MrGuder
So glad I didn't wait and got the iPad Air 2 during the "best deal in the world" Staples deal. I don't want a gift card just gimme the deal.
Score: 2 Votes (Like | Disagree)

nostresshere
Just bought the watch at Target. With $100 gift card thrown in. Lots of people getting Ipads. Unless they have more inventory coming, they will not have any on Friday.
Score: 1 Votes (Like | Disagree)

bpeeps
Apple TV goes on sale tomorrow at Target. My buddy actually convinced them to honor the ATV sale for tomorrow, today. Though HHGregg has it on sale for $115 on their website right now for the 32G.
Score: 1 Votes (Like | Disagree)
Read All Comments