As part of its efforts to add transit directions in iOS 9, Apple has recently updated Apple Maps to include multiple Amtrak routes in the Northeastern United States. Available mainly in the cities where transit directions have been implemented, the longest Amtrak route available runs from Chicago to New York.

Supported routes include the Northeast Regional, Acela Express, Keystone, Lake Shore Limited, Pennsylvanian, and Maple Leaf, many of which operate between cities in the Northeastern United States. 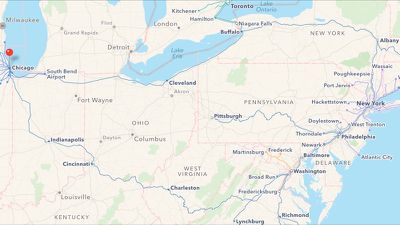 Along with Amtrak support for several cities where transit directions are supported, Apple has also added transit information for the Boston area. Boston was initially added to Apple's list of supported cities earlier this month, but the page was later updated to note the feature wouldn't officially be working until a later date in October.

ZCP
At least it is tough for a train to get lost.
Score: 18 Votes (Like | Disagree)

chucker23n1
Only a matter of years until transit becomes a useful feature for most users.
Score: 16 Votes (Like | Disagree)

BornAgainMac
At this rate I'll be on iOS 30 by the time it covers my area.
Score: 15 Votes (Like | Disagree)

Four oF NINE
Why is transit information so slow to be included in Apple Maps?
Score: 13 Votes (Like | Disagree)

At this rate I'll be on iOS 30 by the time it covers my area.

I use Apple Maps for everything as a default.
Score: 9 Votes (Like | Disagree)
Read All Comments