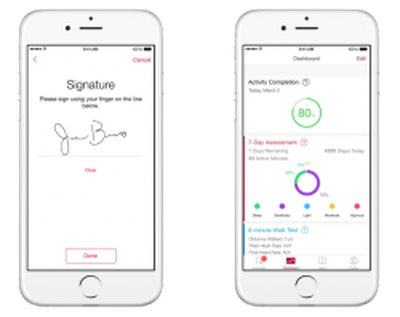 “We’re honored to work with world-class medical institutions and provide them with tools to better understand diseases and ultimately help people lead healthier lives,” said Jeff Williams, Apple’s senior vice president of Operations. “In just six months, ResearchKit apps studying everything from asthma and diabetes to Parkinson’s disease, are already providing insights to scientists around the world and more than 100,000 participants are choosing to contribute their data to advance science and medical research.”

- Autism & Beyond: Duke University and Duke Medicine, in partnership with Peking University in China and other international institutions, are researching whether the front-facing iPhone camera can be used to detect signs of developmental issues at a much younger age. The study uses emotion detection algorithms to measure a child’s reaction to videos shown on iPhone.

- EpiWatch: The EpiWatch app developed by Johns Hopkins will test whether the Apple Watch's sensors can be used to detect the onset and duration of seizures. The app will feature a custom Apple Watch complication that provides patients with one-touch access to record accelerometer and heart rate sensor data, and will also keep a log of all seizures and track medication adherence.

- Melanoma: Oregon Health & Science University is studying whether digital images taken on an iPhone can be used to learn about mole growth and melanoma risks. Participants can document mole changes and share them directly with health professionals, and researchers will be able to capture these images to help create detection algorithms for future melanoma screening.

ResearchKit is an open source framework, launched in early 2014, that enables developers to create their own iPhone apps for research purposes, with studies available for asthma, breast cancer, cardiovascular disease, diabetes, Parkinson’s disease and more. More than 50 developers and researchers have already contributed new research modules to the open source framework.

In just six months, more than 50 researchers have contributed active tasks to support new methods of research, including tasks to study tone audiometry for hearing loss; the ability to measure reaction time through delivery of a known stimulus to a known response; a timed walk test; PSAT to assess the speed of information processing and working memory, and the mathematical puzzle Tower of Hanoi often used for cognition studies.

ResearchKit apps can access data from the Health app with permission, and use iPhone sensors such as the accelerometer, gyroscope, microphone and GPS to track a user's activity levels, motor impairments, memory and more. The research apps, available on the App Store in the U.S. and select other countries, are compatible with the iPhone 5 or later and fifth-generation iPod touch or later.

ResearchKit studies generally have higher signup rates than traditional medical studies, with more than 100,000 participants contributing their data to the iPhone-based platform since its wide launch in April 2014.

TXCherokee
While I know that Apple does some things that seem to improve their profit margin, it is things like this that make me want to believe there is a group of people there that really do want to change the world for the better. And that, among a few other things, are what keep me buying their products.
Score: 13 Votes (Like | Disagree)

Rogifan
But I thought Apple was just a fashion company that made "iToys"?
Score: 5 Votes (Like | Disagree)

Hagrid
Bravo Apple and the great researchers. As TXCherokee already said in another post "it is things like this that make me want to believe there is a group of people there that really do want to change the world for the better. And that, among a few other things, are what keep me buying their products." I couldn't have said it any better
Score: 5 Votes (Like | Disagree)

bigmac4u
It is so nice and refreshing to read an article and also the comments without the ranting, anger, hate and bullying comments from the "I-don't-know-why-are-you-in-this-blog" kind of people. There is hope for humanity some how.
Great work Apple.
Score: 4 Votes (Like | Disagree)

RobQuads
This is great to see. Having a wife that suffers from Epilepsy this is all good.

As for the question about data - they will be able to analyse the data and while a certain amount of it will be invalid there will be a hell of a lot of valid data. Normally these sorts of studies take a lot of work to get any sort of sizeable data but this really does enable to them to do it in a fraction of the time of traditional system.
Score: 4 Votes (Like | Disagree)

Tarrant64
I want to like what they are doing here, but a lot of the data required to accurately study epilepsy I'm not honestly sure the Apple watch can do. Looking forward to seeing what they come up with. They should probably check out others who have already made great strides in terms of monitoring for epilepsy.