Photoshop Elements 14, Adobe's image editing software, has gained tools for removing camera shake and for removing haze. Adobe first introduced haze removing tools with its 2015 Creative Cloud update, and has now brought that capability to Photoshop Elements 14. While the haze removal tool is useful for improving the look of outdoor shots, it can also be used to clean up old photos and improve the lighting in backlit shots. 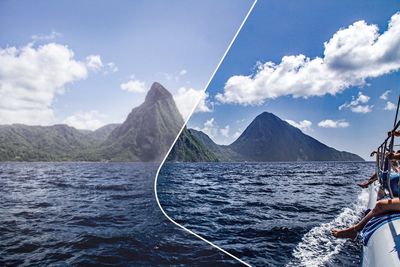 Adobe's shake removing tool introduces auto shake reduction. It's able to analyze a photo and fix it to remove blur caused by camera movement, with tools for fine tuning the final look of the image.

In addition to these two new tools, Adobe has also included new capabilities for several existing features. Guided Edits, the built-in tutorial tool in Photoshop Elements has been updated with new options that walk customers through adding motion blur and resizing photos to specific frame sizes. Guided Edits also include new before and after effects to make it clearer what each one does.

There are enhanced auto correct tools that provide five correction options after subject, color, composition, and lighting for each image have been analyzed, and there are much improved tools for selecting fine details in like hair and pet fur in a photo.

Facial recognition capabilities have been improved and faces are now recognized faster and more accurately, and there's a map that shows where photos with GPS included were taken.

Audio enhancement tools have been moved front and center in the app, making them more accessible, and motion titles have also been improved. It's easier to manage video clips with improved organizational tools and better facial recognition to sort by people, place, and event, and both photos and videos with GPS information embedded will be displayed on a map.

Both Photoshop Elements 14 and Premiere Elements 14 for Mac and Windows can be purchased from Adobe's website for $99.99 each. Bundles are available for $149.99, and existing users can upgrade for $79.99 for one product for $119 for the bundle.

After seeing these striking results, I'm definitely going to take a second look at Photoshop Elements.

I was also impressed. However, I don't know if the Elements 14 version of the Shake Reduction tool is different than the same feature in the full blown Photoshop CC 2015 but I took that middle photo of the hikers into Photoshop 2015 to see if I could make the left side look as crystal clear as the right and I couldn't even get halfway there. So, I'm calling BS on this photo as nothing more than marketing fluff. They took a clear photo and then blurred it on the left instead of the other way around.

PS I own a Volkswagen TDI so after the events of this past week, you'll understand my complete and utter mistrust of "too-good-to-be-true" claims by large corporations.
Score: 13 Votes (Like | Disagree)

Porco
I've always been a fan of Photoshop Elements, but with the rise of truly quality alternatives like Affinity Photo and Pixelmator available for lower prices it's becoming more difficult to whole-heartedly recommend it.
Score: 2 Votes (Like | Disagree)

You forget that a lot of pixels are needed for these algorithms to work. No wonder it did not work (as good) on the tiny (probably optimized JPG) versions we have here.

Fair point, but this isn't movie fiction here; blurred images have a true loss of data. There is only so much "magic" in the form of algorithms that can be applied to restore that detail and I'm suspicious with the amount of detail they've restored in the foreground while also retaining the depth of field blur of the background? Really? That's one mighty powerful algorithm there if that's the case. As I noted earlier, just be highly suspicious about amazing claims by large companies.
Score: 2 Votes (Like | Disagree)

I was also impressed. However, I don't know if the Elements 14 version of the Shake Reduction tool is different than the same feature in the full blown Photoshop CC 2015 but I took that middle photo of the hikers into Photoshop 2015 to see if I could make the left side look as crystal clear as the right and I couldn't even get halfway there. So, I'm calling BS on this photo as nothing more than marketing fluff. They took a clear photo and then blurred it on the left instead of the other way around.

PS I own a Volkswagen TDI so after the events of this past week, you'll understand my complete and utter mistrust of "too-good-to-be-true" claims by large corporations.

Ha ha, good one with the VW TDI - I understand what you mean.... But my God it does look effective in these examples.
Score: 1 Votes (Like | Disagree)
Read All Comments