HomeKit officially became available in June, with the launch of the first HomeKit-compatible products, but as we've highlighted in reviews, Apple's home automation platform is still in need of some work to make it a viable choice for most users.

With iOS 9, Apple is debuting several new HomeKit features that have the potential to significantly improve the way it works, by simplifying some of the setup process broadening supported device types, and introducing key automation features to cut down on user interaction.

Setting up HomeKit devices isn't difficult, but it does require users to enter a unique HomeKit identifier to pair with an iPhone. In iOS 9, Apple will support scanning the code with the camera, shaving some time off of the setup process. Information displayed during the setup process, like icons, brand names, and images, is also improved, making the process somewhat more streamlined.

With HomeKit, one of the most confusing and time consuming things to set up are scenes, which allow several devices to work in unison at a specific command. For example, when arriving home, one might want a scene that turns on the air conditioner and turns on the lights, a task that can be accomplished with a Siri command like "Turn on the Home scene." 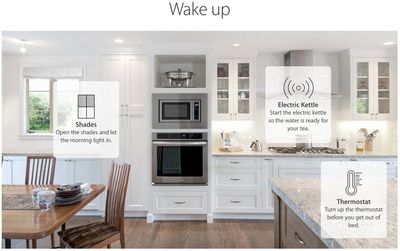 Scenes are useful, but their setup in iOS 8 is not always clear, especially to users who are new to HomeKit. In iOS 9, scenes are more straightforward because developers can add four pre-defined scenes to apps designed to work with their HomeKit-enabled devices. Pre-defined scenes include Getting Up, Leaving Home, Returning Home, and Going to Bed, and will walk users through setting up their devices for each occasion. Siri will automatically recognize these scenes, so Siri response to Scene queries should improve.

Support for New Types of Devices

iOS 9 adds support for new kinds of connected devices and sensors, paving the way for more HomeKit accessories and better interaction with those devices. Window coverings like blinds and shades are now supported in iOS 9, as are motorized doors and windows, complete home security systems, and programmable switches.

New sensors that will be supported in iOS 9 include those that detect things like carbon monoxide, smoke, and water leaks, and those that monitor air quality and humidity. Sensors that detect motion and movement will also be included in HomeKit in iOS 9.

With iOS 9, Remote Access is improving. It will no longer be necessary to have an Apple TV to access HomeKit devices when away from home because Apple has a new iCloud service that device makers can use for their HomeKit accessories. Before iOS 9, accessing HomeKit devices remotely required them to connect to an Apple TV or it required accessory makers to implement their own cloud services.

In our experience, Remote Access through the Apple TV is unreliable, so hopefully the iCloud change will improve things quite a bit.

Triggers are one of the most important new features in iOS 9 because in future devices, they'll allow for a lot more automation. Triggers can be based on location, time of day, and can be set off by the activation of another HomeKit accessory. For example, a HomeKit device that senses when the front door opens will know when you arrive home, automatically setting off a sequence of connected events such as turning on the lights and lowering the temperature.

Developers have access to build triggers into their HomeKit apps going forward, and Elgato's Eve Door and Window sensor will be the first accessory to support Triggers.

In iOS 8, setting up HomeKit access for multiple users is no picnic, but bug fixes and improvements to the multi-user setup process in iOS 9 will make it easier to invite other people in your household to access HomeKit devices.

With watchOS 2 and iOS 9, HomeKit devices can be controlled right from the wrist with Siri commands.

Last week, Apple launched a new iOS 9-focused HomeKit site that better explains how HomeKit works and details the ways in which it can be useful to automate the home. The site covers available products, goes over the Siri commands that can be used with HomeKit, and offers information on some of the new iOS 9 features like pre-defined scenes and triggers.

The new site is well worth checking out to get a better understanding of what's possible with HomeKit in iOS 9.

Apple is at an awkward state at the moment. 2016 will either make or break Apple in terms of if they choose to keep introducing new half baked tech or work on what they already have. I don't mean all new tech from them is half done, I'm just saying it seems like they have a solid idea of why they introduced something but then they don't refine it over time. Seems like they'd rather keep adding brand new features to new products as an incentive for people to upgrade (keeps sharholders happy)... But that process becomes a vicious cycle because the new features are not very refined either.

I for one would love if it we had less new products/services next year and instead had some really great revamps on current stuff. Imagine what we would have today if 2015 was the year of OS revamps and software improvements. I thought iOS 9 and El Cap were supposed to be the 'Stability Updates' but apparently some things were left alone (Primarily Apple Music and Safari).

You mean like adding transit directions to maps, or making TouchID faster, or signing up more banks to support Apple Pay, or making the LTE radio in the iPhone compatible with more bands?
Score: 2 Votes (Like | Disagree)

macosxuser01
Still don't get why the new Apple TV was not used as a hub for HomeKit
Score: 2 Votes (Like | Disagree)

btrach144
Apple really needs to work on HomeKit and Healthkit. Lots of potential but not much happening. Sad to see really. Seems totally unlike Apple.
Score: 1 Votes (Like | Disagree)

Just slap an i in front of it and BOOM, instant Apple name.

I hope it comes soon. I have a bridge and two lightbulbs and am looking to ask for more for Christmas. My only issue is that the lights in my house with fans have sockets that are too small, so I also have to replace those. I think they need to work on pricing if this is going to take off. While I love the idea, spending hundreds of dollars to make turning lights on and off is not a financial priority to me and others. I also noticed on the link someone posted in response to your reply that I will also have to purchase a new bridge to replace the one I just bought two months ago if I want to integrate into HomeKit. Which of course, I do.

They really need lights for those smaller socket bulbs. I have a few fans lights and bar lights I would love to replace, but the sockets are too small.
Score: 1 Votes (Like | Disagree)

Apple really needs to work on HomeKit and Healthkit. Lots of potential but not much happening. Sad to see really. Seems totally unlike Apple.

I agree. There wasn't even a single mention of it during the introduction of the new Apple TV.
Score: 1 Votes (Like | Disagree)
Read All Comments