'Steve Jobs: The Man in the Machine' Documentary Debuts Today in Theaters and on VOD

The new documentary Steve Jobs: The Man in the Machine today sees its wide release into theaters and onto video on demand platforms. The film first debuted at SXSW in March and met a bit of controversy thanks to its depiction of Jobs as a merciless force, with less time spent on his greater contributions to Apple and his impact on the world. Subsequently, Apple senior executive Eddy Cue called the film "an inaccurate and mean-spirited view of my friend" and "not a reflection of the Steve I knew." 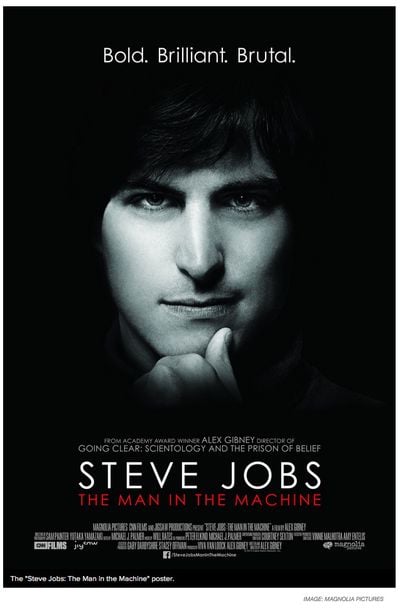 Now that the film has seen a slightly wider release in critic screenings before its launch today, a few more opinions have been gathered on the review aggregate website Rotten Tomatoes. The film currently sits at a 75% with 30 fresh and 10 rotten reviews, with an overall consensus calling the film "absorbing" but lacking any deep understanding of Jobs himself. The movie's theatrical run is pretty limited to start, with it only hitting 65 screens in 50 markets, according to Deadline. The usual cities of New York, Los Angeles, and San Francisco will more heavily serve viewing of the documentary.


Fortunately, Steve Jobs: The Man in the Machine is seeing a simultaneous theatrical and VOD release. Users can watch the movie at home on services like iTunes, VUDU, Xbox Video, and The PlayStation Store. Its price varies drastically between each service, with the cheapest HD rental coming from iTunes for $4.99 and the highest option coming from VUDU for an $8.99 HDX version of the film.
Tag: Steve Jobs TMITM
60 comments

Inaccurate, Eddie? You're saying Jobs didn't deny paternity of his daughter Lisa? That's not exactly a minor character flaw. Eddie, get your head out of your ass.

I wonder if he would give the same lame defense of Dre, considering his behavior.

The funny thing about our world and especially the world according to Americans, is that someone is either a perfect hero or a perfect villain. The reality is a bit more complex. No one is perfect in either direction.

It is hard to defend (especially as a father myself) SJ denial of his own daughter. That, to me, is some seriously messed up stuff. It is also hard to deny that he accomplished great things in the world of technology. In addition to the complexities of humanity that creates a man like this, it also provide some insight into what makes him, him, and what he values more.

Dre is much the same. He screwed up pretty bad in his youth but seems to have done better as he has matured. Do we judge him for ever based on his past actions? Do we ignore those actions? Or do we recognize the complexities of his humanity that has evolved over the years.

I for one, cannot judge someone based on a single fact or based on something from long ago. I include that in my judgement, but it is not the exclusive reason for the judgement. This carries into politics. All too often people vote based on a single issue such as abortion or gay marriage or whatever. The world is just too complex for me, and to simplify it to a single issue, makes no sense.

Okay, sorry, that turned into a bit of a rant, which was not my intention.
Score: 29 Votes (Like | Disagree)

The funny thing about our world and especially the world according to Americans, is that someone is either a perfect hero or a perfect villain.

The reality is a bit more complex. No one is perfect in either direction. It is hard to defend (especially as a father myself) SJ denial of his own daughter. That, to me, is some seriously messed up stuff. It is also hard to deny that he accomplished great things in the world of technology.

Well stated too. One's atonement should always be considered too. Jobs did work later in his life to build a connection with his first daughter, and ended up raising quite a nice family with his wife as well. His early actions with his girlfriend and first daughter are not worth defending by anyone, but I don't see those actions as a reason to discredit everything he's done in his life. If the true victim of his actions, his own daughter, can forgive him and move on, then the rest of us should be able to as well.

What bothers me about such binary thinking is that it can send a message to someone who has done something bad that there is no forgiveness or redemption. And that can lead someone with an unstable mind to go down a very dark path. Giving someone a second chance and helping to guide them to better actions in the future is far more beneficial to society as a whole then shunning people the second they step out of line.
Score: 8 Votes (Like | Disagree)

I'm not watchin' it.

You're saying Jobs didn't deny paternity of his daughter Lisa?

Anybody got a UK release date on this?

Whether it's completely accurate or not, Apple and the execs don't apparently disagree enough to refuse to make some money from it.

If Apple's executive staff felt strongly about the movie, they could and would refuse to stream it through iTunes.

The fact that they're offering it, shows they care more about the money than whether or not it accurately portrays Steve.

I'm personally not bothered either direction. It's a movie. And, like all movies, it's impossible to capture every intricacy of decades of a life in a couple hours.

The thing about the negative reviewers, is that they still watched the movie, and the publisher still got their money. It all works for the studio regardless of whether you like or disliked the film.

Whatever they might feel about it, if they were to do what you are talking about, somehow we'd likely be discussing some sort of a "censorship-gate" type of thing all of a sudden.
Score: 3 Votes (Like | Disagree)
Read All Comments