Sprint today introduced a new plan called "iPhone Forever," which grants upgrade eligibility for the newest iPhone to any customer who doesn't have the most current version of Apple's flagship smartphone on their contract. The plan goes into effect today, and the company is opening the data plan to both new and old Sprint users, although the latter must have an upgrade eligible device to start using iPhone Forever. 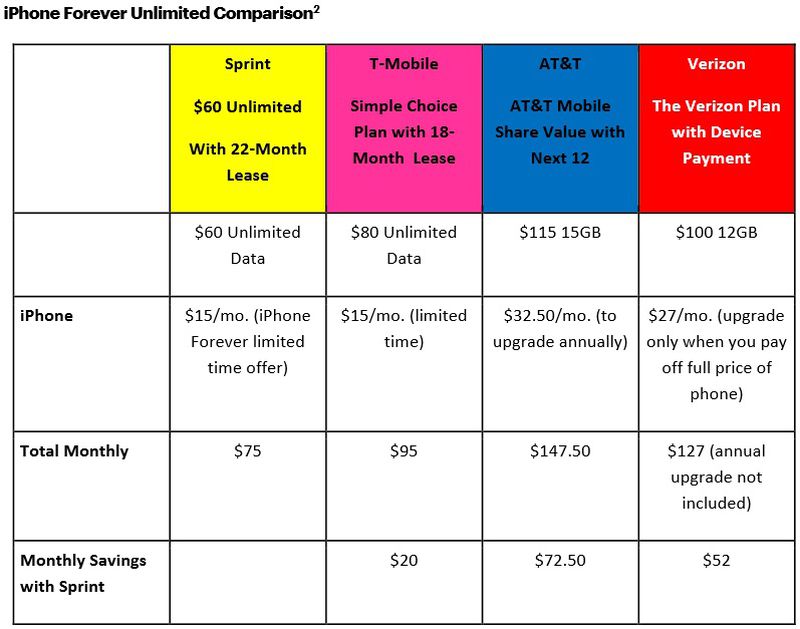 “We asked ourselves, ‘What could we do that would move our customers forward with the latest and greatest technology every day?’ said Marcelo Claure, Sprint CEO. “We decided: How awesome would it be if anytime customers don’t have the latest iPhone, they are eligible to upgrade, and have it be as simple as handing us your existing iPhone and picking up a new one – all included in your monthly rate.”

iPhone Forever lets customers get an iPhone for $22 a month, with the simple rule that anytime they don't have the latest iPhone on their plan, they are automatically eligible for an upgrade. Sprint is also discounting the service to $15 per month for any customer who trades in an existing smartphone, the catch being that the new phone purchased has to be a 16GB iPhone 6, and the monthly rate will increase back to the normal amount after their next upgrade.

The $15 promotion will last until December 31, 2015, and the company notes that iPhone Forever is available on "any eligible Sprint rate plan." Sprint's announcement today follows a few week's worth of other carriers' detailing the introduction of their own brand new service plans for customers, no doubt all preparing for the next-generation iPhone launch sometime next month.

Shanpdx
iPhone will be never be yours*

iPhone will be never be yours*

Welcome to more debit, buy the thing you cannot afford.


Actually, debt would be if they told you the iPhone was yours but you would pay them slowly and probably with interest.

They are lending you a phone for $15 a month so it's more like renting a house which I do not see many people arguing against.

Furthermore, $15 x 12months would be $190, do you expect to sell your previous generation phone and "loose" less than that? In my country that is not possible.
Rating: 8 Votes

shareef777
Too bad it's Sprint. Worst coverage ever in the Chicago area. No wonder T-Mobile surpassed them to become #3.
Rating: 7 Votes

Too bad it's Sprint. Worst coverage ever in the Chicago area. No wonder T-Mobile surpassed them to become #3.


Worst coverage in their hometown of Kansas City, MO too.. no matter what coverage study they paid to be at the top of.
Rating: 5 Votes

tomnavratil
This can be very dangerous, more and more borrowing for goods and services, which aren't an investment or aren't making any money. What happened to the old "I buy it when I have spare cash to do so" attitude?
Rating: 5 Votes

This can be very dangerous, more and more borrowing for goods and services, which aren't an investment or aren't making any money. What happened to the old "I buy it when I have spare cash to do so" attitude?


There's nothing wrong with borrowing money so long as you can manage the payments. In many cases, it's a smart move since you can put your money to work elsewhere; especially if the other guy puts up the money at no cost to you (ie, no interest).
Rating: 4 Votes

Chupa Chupa
$75/mo + $330 subsidized price is what I'm paying for ATT unlimited data w/ 2 yr contract. I get to keep the phone too.

Where is the value here? Esp. on Sprint's network.
Rating: 3 Votes

This can be very dangerous, more and more borrowing for goods and services, which aren't an investment or aren't making any money. What happened to the old "I buy it when I have spare cash to do so" attitude?


To me it's not about buying something you can't afford. You aren't getting underwater with these phone leases. Just think of it as part of your phone bill.
Rating: 3 Votes

CEmajr
Looks like an exact replica of the T-Mobile Jump on demand program.
Rating: 2 Votes
[ Read All Comments ]