AT&T today announced that the carrier plans to introduce a couple of new Mobile Share Value Plans beginning tomorrow, further expanding data bucket options for its customers while simultaneously cutting the prices of a few existing data storage options. Customers will have new options like 2GB ($30) and 5GB ($50), but those who opt-in for a plan with 15GB or higher will get unlimited talk and text to Mexico and Canada.

“There’s never been a better time to be an AT&T customer," said David Christopher, chief marketing officer, AT&T Mobility. “Tomorrow, we roll out new plans for everyone, including a plan that gives 50% more data than on our most popular plan. And we’re not done yet.”

All of the plans being announced tomorrow cover the same benefits and options under AT&T Next, which allows users to pay for their phone in monthly installment plans of 12, 18, or 24 months. AT&T mentions briefly that "select locations" still provide two year contracts for $40 per line, but the company is in obvious motions to begin supporting subsidized contracts less and less as they pivot to a focus on Next's installment plans.

sputnikv
300MB/month? Why even offer this?
Rating: 12 Votes 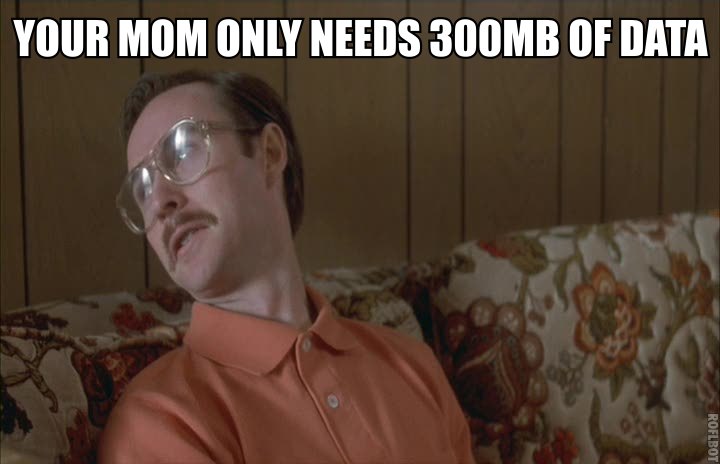 keysofanxiety
Goddamn reading this article and seeing the prices really highlights how American mobile carriers screw the customers. I get unlimited calls, unlimited texts and unlimited data -- albeit 3G -- for £20 ($31) a month. The rest of Europe's prices are fairly synonymous with this too.
Rating: 7 Votes

S197Mike
What does this mean for me? I have the old 15GB plan but upgraded to the double data when ATT was offering it a short time. Now I have 30GB. No price change?
Rating: 6 Votes

The connect fees are BS. It's why I still buy iPads wi-fi only. What do you need $15 A MONTH to connect my iPad. I paid for it and you didn't subsidize it PLUS I've already paid for the gigs of data so whether I have the iPad or not, I still have my gigs of data.

US cell companies are running a racket.
Rating: 4 Votes

Xenomorph
I'd like to get in on the free Canada / Mexico, but I currently have the 30GB "double data" plan. I don't want to lose that!

This is great for anyone on the current 10GB tier, though.
Rating: 4 Votes

Not comparable.
How much does it cost you to call a non-geographic number? Call another mobile phone? Cost to send picture messages? Call a destination 2,500 miles away? Travel 2,500 miles away and make calls and use data? Additional cost for people to call your phone from a landline? This is all free in the US.

Just to clarify, my original point wasn't "whoo!! go Europe! US sucks!", but more "I hope you get fairer prices soon". I'm not sure why you're being so defensive for companies who, at the best of times, are widely regarded as pounding the consumer. But hey, if you're happy paying $100 a month because you feel you get more for your money, who am I to argue.
Rating: 4 Votes

It's for people on dumbphones. They still have to purchase data. A dumbphone works out to be $40 a month with unlimited minutes and text, with no subsidy.
Rating: 3 Votes