A group of filings posted to the U.S. Federal Communications Commission website yesterday (via SlashGear) reveal impending upgrades for Apple's Magic Mouse and wireless keyboard accessories. Images accompanying the filings point to the Magic Mouse's successor to simply be titled "Magic Mouse 2," but no specific name for the new wireless keyboard has been revealed. 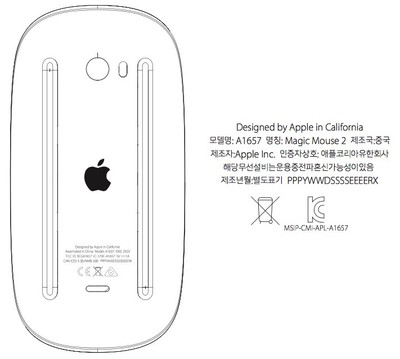 The internals of both devices will see a notable overhaul in their Bluetooth capabilities, with each device getting a bump from Bluetooth 2.1 to Bluetooth 4.2. The upgrade will bring about Apple accessories that should see a noticeable increase in battery life and more robust communication between the input devices and the main computer.

Also of note is the inclusion of integrated lithium battery packs, which users will have to charge instead of the swapping in traditional AA batteries as seen in the current generation of the Magic Mouse and Apple wireless keyboard. The change is noticeable on the wireless keyboard in particular, with Apple able to do away with the barrel shaped feature on the bottom of the existing keyboard where the replaceable AA batteries are housed.

Both the Magic Mouse 2 and wireless keyboard have undergone testing with "pre-production" builds of each device, so the possibility of a release sometime before or on Apple's upcoming September iPhone media event may be likely.

AngerDanger
The bluetooth efficiency of the new Magic Mouse will be rivaled only by its lack of ergonomics. :)

HobeSoundDarryl
When the existing Magic Mouse runs low on battery, it sure is nice that downtime is only the length of time it takes to swap 2 rechargeable AA batteries for the 2 that are drained (no more than about 30-60 seconds). While the Lithium option probably means a much longer time between charges, I hope that one doesn't have to swap mice when they forget to charge it when it's close to empty... or more regularly monitor for "low battery" so you can catch it on the day before it is going to be exhausted.
Score: 37 Votes (Like | Disagree)

DanTheAppleMan
Rechargeable peripherals have never sat well with my workflow. It's much easier to swap AAs than to be inconvenienced while it charges. Hopefully there's an elegant solution in the works.
Score: 30 Votes (Like | Disagree)

Garsun
I hope they make a fullsize keyboard. My old Bluetooth full sized keyboards are getting a bit long in the tooth
Score: 23 Votes (Like | Disagree)
Read All Comments