Honda Introduces 2016 Accord With CarPlay and Android Auto Support

Thursday July 23, 2015 4:50 pm PDT by Joe Rossignol
Honda today at its high-tech research facility in Mountain View introduced its new 2016 Accord with support for both CarPlay and Android Auto, reports Re/code. The ninth-generation sedan will be the first Honda vehicle to support CarPlay as the Japanese car maker aims to expand the iPhone-based dashboard system across its vehicle lineup throughout 2016 and beyond. 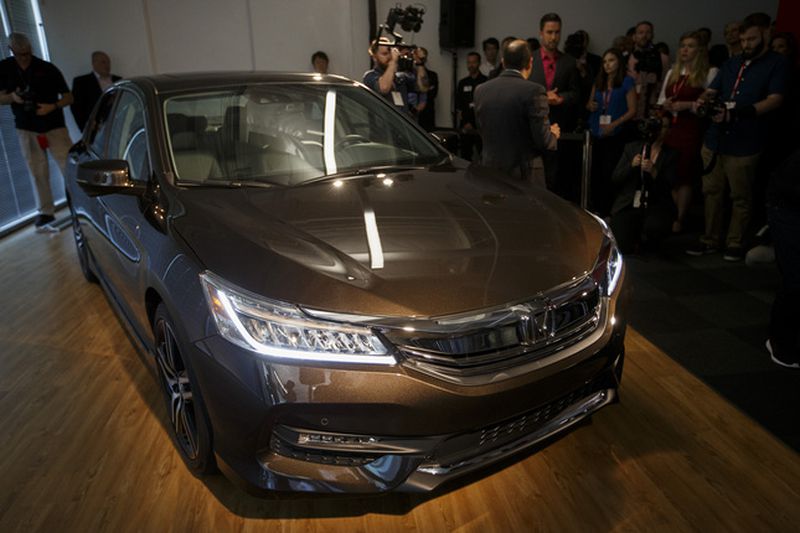 CarPlay will come standard on 2016 Accord EX, EX-L and Touring models. Honda opted to announce the mid-sized vehicle in Mountain View, as opposed to traditional auto hotbeds such as Detroit and Los Angeles, because of Silicon Valley's growing importance to the auto industry, particularly as vehicles become more connected with CarPlay and other modern technologies.

Apple has listed Honda as a CarPlay partner on its website for several months, but the car maker has not been entirely clear about its launch plans until today. GM is also committed to supporting CarPlay in 2016 across its Chevrolet, Cadillac, Buick and GMC vehicle brands, while Kenwood recently began shipping its lineup of aftermarket CarPlay and Android Auto systems.

How hackable is the car, though? I'm thinking that apart from Tesla's, I'm going to stick with cars which are made pre-2010 or so to avoid the possibility of being hacked (more precisely, I'll just investigate all the possible attack vectors.)

Worrying about being hacked is irrational. You're so likely to be seriously injured in a car accident, the risk of being hacked is negligible by comparison.
Rating: 4 Votes

Robert.Walter
Hey Honda, how about the coming class-action lawsuit for all the cars you sold last year with the new audio display where your dealers said it would be backward compatible with CarPlay** (because the beta was run in customer cars with regular production head-units running CarPlay firmware delivered by USB stick)???

** and then you tweeted 2 weeks ago that CarPlay wouldn't be backward compatible.

Whatever happened to Honda's vaunted and legendary customer care?? Seems like it has now been replaced by bait and switch.
Rating: 3 Votes

I know, right? There's always the possibility it CarPlay could come via a firmware update---bwahaha, oh, who am I kidding? We'll never get CarPlay. :(

Automakers must think that people will buy a new car just to get CarPlay. Instead of offering software upgrade (heck, charge $150 like they do with incremental annual map update) and earning customer royalty, they choose to bitch slap customers.
Rating: 3 Votes

Honda has always been mediocre cars. Ask millions with their 5 speed autos that destruct how they were treated? Or those with VCM issues in the V6's. Honda has never been anything special.


the public must be fools to buy Hondas in droves year after year, and those magazines that rate them top ten mid-size sedan year after year...
Rating: 3 Votes

AustinIllini
Why does Honda make them so ugly?

Oh yeah, they're the "Cool Car Company" cause they have Elon to worship...

No other car company does any of that. They've all strapped on random "smart" features in the least intelligent ways, with no regard for security at all.
Rating: 3 Votes

Well, guess I should give up on my 2014 Civic EX getting it... even though my model's dash has been the display dash used on the CarPlay site ever since CarPlay was announced. *sigh*


I know, right? There's always the possibility it CarPlay could come via a firmware update---bwahaha, oh, who am I kidding? We'll never get CarPlay. :(
Rating: 2 Votes

gorkt
Is the 2016 Cr-V getting Carplay? So odd that they would only roll this out for the Accord.
Rating: 2 Votes

cookies!
This is the worst. Part of why I got the 2015 Civic was because I was told it would be Carplay compatible with a future update.
Rating: 2 Votes

Your car is not going to get hacked. Stop listening to the fear mongering put out by the mainstream media. The recent clowns with the Jeep did not just take a car off the lot and remote "hack" it. They had to physically upload new firmware into the system. I won't even get into what systems they claim are hackable but on that car are actuated by a physical switch(like the windshield wipers). Those people also operate a car security consulting firm so that explains their true intent.


You didn't read the article too well. Once they have the car's IP address it's game over:


And thanks to one vulnerable element, which Miller and Valasek won’t identify until their Black Hat talk, Uconnect’s cellular connection also lets anyone who knows the car’s IP address gain access from anywhere in the country. “From an attacker’s perspective, it’s a super nice vulnerability,” Miller says.

From that entry point, Miller and Valasek’s attack pivots to an adjacent chip in the car’s head unit—the hardware for its entertainment system—silently rewriting the chip’s firmware to plant their code.

They were able to, with a Sprint phone on the Sprint network get GPS coordinates and VIN's of cars hundreds of miles away.


A set of GPS coordinates, along with a vehicle identification number, make, model, and IP address, appears on the laptop screen. It’s a Dodge Ram. Miller plugs its GPS coordinates into Google Maps to reveal that it’s cruising down a highway in Texarkana, Texas. He keeps scanning, and the next vehicle to appear on his screen is a Jeep Cherokee driving around a highway cloverleaf between San Diego and Anaheim, California. Then he locates a Dodge Durango, moving along a rural road somewhere in the Upper Peninsula of Michigan. When I ask him to keep scanning, he hesitates. Seeing the actual, mapped locations of these unwitting strangers’ vehicles—and knowing that each one is vulnerable to their remote attack—unsettles him.


You also don't know much about the modern car. Things that are operated by switches actually travel over the CAN bus to the computer and the computer signals the thing on. Power windows don't go directly to the motor - they go over the CAN bus to a GEM (Generic Electronic Module) or other type of module that processes the data and then commands the motor up and down. It's how they can do things like have your key fob open the windows, the car auto start, auto wipers, auto headlights, etc.
Rating: 2 Votes