A few new images of the so-called "iPhone 6s Plus" today have been shared by Future Supplier (via Nowhereelse.fr), putting emphasis on the new iPhone's visual similarities to the iPhone 6 and iPhone 6 Plus line-up while mentioning a "stronger" construction to the device's rear casing. 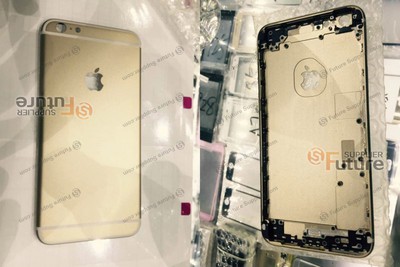 Future Supplier noticed a slight difference between the iPhone 6s Plus and last year's model, specifically in the location of a few screws used to hold the loud speaker module. But otherwise, the website noted a pretty aesthetically similar device, which makes sense for an "S" generation upgrade for the iPhone 6 line.

iPhone 6s Plus on the left with screw holes that are "slightly higher" than the iPhone 6 Plus' on the right
Another slight difference may come in the material actually used to create the rear housing for the iPhone 6s Plus, according to a source that spoke with Future Supplier. The source noted that the backing of last year's iPhone 6 Plus was "smoother" than the new iPhone, but simultaneously the 6s Plus will be getting a "stronger" rear housing, perhaps in response to the "Bendgate" controversy.
[ 195 comments ]

japanime
Does this mean the end of "Bendgate"? A problem that never actually existed.
Score: 22 Votes (Like | Disagree)

Interesting that Apple took the "it is a non-issue" approach with the whole bend-gate thing yet they are doing this. Much welcomed but my 6 Plus bent and they wouldn't replace it saying it was my fault.

penajmz
Interesting that Apple took the "it is a non-issue" approach with the whole bend-gate thing yet they are doing this. Much welcomed but my 6 Plus bent and they wouldn't replace it saying it was my fault.
Score: 14 Votes (Like | Disagree)

Interesting that Apple took the "it is a non-issue" approach with the whole bend-gate thing yet they are doing this. Much welcomed but my 6 Plus bent and they wouldn't replace it saying it was my fault.

Er......Didn't you hear the posters above you???
Your phone never bent at all you were either making it up or you were looking at it wrong.
Score: 14 Votes (Like | Disagree)
Read All Comments