Banks in the U.K. Gearing Up for Apple Pay Launch as Santander Allows Customers to Register Cards

Apple Pay in the United Kingdom has yet to officially launch, but some banks are preparing for the upcoming release of the payments service and have begun allowing customers to register their cards for use with Apple Pay.

Several Santander customers on the MacRumors forums have been able to successfully add their cards to Passbook for use with Apple Pay, making the cards available on both their iPhones and their Apple Watches. 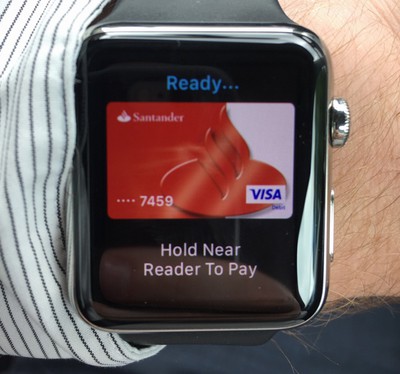 Customers registering their cards are also receiving confirmation emails from Santander, informing them that they're now able to use Apple Pay. As of the time of writing, customers have not yet tested the Apple Pay service at a location that accepts Apple Pay. One customer was told the bank's system is not live and that customers who were able to mistakenly register early would be de-registered, so it is not clear if the registered cards will be able to be used to make purchases.

Activating a Santander card with Apple Pay at this time requires U.K. users to set their region to U.S., add a card, and change their region back to U.K., at which point the card remains available in Passbook. It's clearly a workaround, but a sign that banks are preparing to accept Apple Pay in the near future.

It is not clear exactly when Apple Pay will become officially available in the United Kingdom, but during its Worldwide Developers Conference, Apple said the payments service would launch in July. Recently released employee training documents have suggested the launch could come next week, on Tuesday, July 14. 250,000 merchants are expected to support Apple Pay in the U.K. when it is released.

Update: One of the Santander customers who was able to activate his card for use with Apple Pay was able to use it at a McDonald's to make a purchase.

Update 2: Santander customers who were able to activate their cards are now receiving email notifications letting them know the Apple Pay service is no longer available for use.

Have the soulless ghouls at Barclays caved in yet?

They're throwing their lot in with Betamax, I think.
Score: 17 Votes (Like | Disagree)

UKPoliticsGuy
Have the soulless ghouls at Barclays caved in yet?
Score: 13 Votes (Like | Disagree)

BruceEBonus
McDonalds have been using Apple Pie here in the UK for decades now. I don't know what all the fuss is about. You can burn your mouth over here just as easily and as quickly as you can in the States.

Ok, maybe I'm just clueless, but can anyone tell me what possible benefit Apple Pay has over pulling out a physical card and swiping it?

Here are the steps to pulling out a card and swiping:
[LIST=1]
* Get wallet out of pocket
* Get out card
* Swipe card
* Enter PIN if paying with a Debit card
* Sign if not using a debit card and purchase is over the limit
* Put card away
* Put Wallet Away

So, really, I am not seeing any benefit to Apple Pay or other NFC payments.

Can't really top ggt's answer but for clarity:
[LIST=1]
* Get out phone, leaving snarky mindset in pocket
* Tap phone to terminal while resting thumb on TouchID
* Put phone away
Score: 8 Votes (Like | Disagree)

576316
Getting seriously angry at Barclays...they need to say something soon. It's totally pathetic if they just remain quiet even after the official launch comes and goes. They've just released their totally pointless 'bPay' rubbish which can never hope to be as widespread as Apple Pay. Even if they're trying to give consumers choices, they shouldn't be blocking Apple Pay. That's the opposite of consumer choice. If they can't get off their greedy a**es and start supporting Apple Pay, I (and many others) will be finding a new bank.
Score: 8 Votes (Like | Disagree)

Personally, I agree with you and try and keep my money with something as English as the Queen herself.

Friday July 30, 2021 9:04 am PDT by Sami Fathi
Tesla CEO Elon Musk reportedly once demanded that he be made Apple CEO in a brief discussion of a potential acquisition with Apple's current CEO, Tim Cook. The claim comes in a new book titled "Power Play: Tesla, Elon Musk and the Bet of the Century," as reviewed by The Los Angeles Times. According to the book, during a 2016 phone call between Musk and Cook that touched on the possibility of ...
Read Full Article • 170 comments