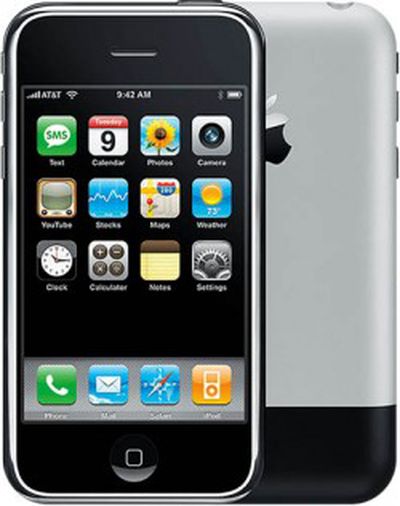 Eight years ago today, the smartphone market changed forever. On June 29, 2007, Apple released the original iPhone with a sleek form factor and revolutionary multi-touch screen and significantly disrupted an industry then dominated by companies such as Nokia, BlackBerry, Sony and Motorola.

The original iPhone was exclusive to AT&T in the United States before launching in the United Kingdom, France, Germany, Portugal, Ireland and Austria in November 2007. The 8GB model initially cost $599 on a two-year contract until Apple dropped the price to $399 in September 2007, far more expensive than today's starting price of $199.

The eighth anniversary of the original iPhone's release takes place just one day before the worldwide debut of Apple Music, another launch that could prove historic as Apple attempts to enter the crowded streaming music market alongside Spotify, Pandora, Google Play Music, YouTube and other players. Fittingly, many people will try Apple Music for the first time using an iPhone.


Apple has since sold hundreds of millions of iPhones around the world and launched ten models in eight years, ranging from the iPhone 3G and iPhone 3GS to the iPhone 6 and iPhone 6 Plus. In the second quarter, the iPhone accounted for nearly 70% of Apple's revenue alongside the iPad, Mac, iTunes and other products and services.
[ 206 comments ]

viperGTS
Apple changed the market, and for the better. :)
Score: 22 Votes (Like | Disagree)

Z400Racer37
So grateful to Steve and the Apple team for their work. 

AngerDanger
I remember excitedly watching a demo of Google's experimental mobile OS, Android, a few months before the iPhone's release. I saw it on this wacky YouTube site, which hosted many low quality videos to be played in boxes with large gradated buttons. The experimental OS was running on some BlackBerry device using button-based navigation. The iPhone just blew me away.
Score: 10 Votes (Like | Disagree)

mikepepe86
I actually worked for Apple and helped launch the original iPhone. I was at a store the night before helping to setup for the launch and we all got phones to learn on that night so we were among some of the first people to have consumer versions. I'll never forget I turned it on and hit the Safari button and me & the other guy that were learning the phone to demo started laughing and were like 'Holy ****! This IS the future'. Really cool memory.

I also remember at Cupe in Cafe Macs at the time they had human size iPhones that you could actually play with haha. It was weird and awesome. They also gave us all free iPhones of our own which was simply amazing.

The culture at the time was so much different than it is now...I haven't worked for Apple for a long time; I launched the 3G and then was out but I have a lot of friends who still work for them and the culture has definitely shifted. Not that it's a bad thing but it is different. Having said that the corporate excitement over the Apple Watch is apparently pretty similar to what the original iPhone was from what they tell me!
Score: 9 Votes (Like | Disagree)

AppleWarMachine
eight years later (a long time for tech) and the storage for the base model has only doubled from 8GB to 16GB! :eek:
Score: 9 Votes (Like | Disagree)

i5pro
Um, there was a 4GB model initially....
Score: 8 Votes (Like | Disagree)
Read All Comments