Developers who are installing the second beta of iOS 9 have discovered a highly useful iOS 9 space management feature, which will help users who have little space on their devices install major operating system updates.

When attempting to install iOS 9 on a device with insufficient space, there's a popup that offers to temporarily delete some apps in order to make room for the update. Apps that are deleted are then reinstalled and replaced after the operating system update is completed. 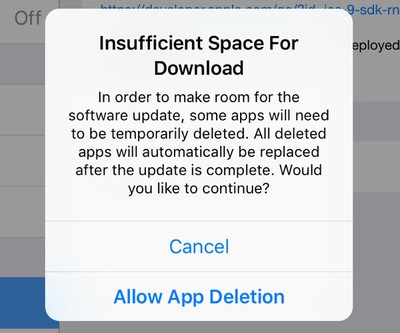 With iOS 8, many users with 16GB devices were disappointed with the large installation size of the operating system. As it was over 4GB, few users with 16GB devices had the space for the update, which may be one of the main reasons that iOS 8 installation rates were slow for several months following release. Given the disappointment that many customers expressed with the install size of iOS 8, Apple's made efforts to make iOS 9 much more space efficient.

Apple has significantly reduced the installation size of the operating system to just 1.3GB to make it easier for people to find the space for an update, and this new auto app deletion feature will ensure that almost all customers can upgrade their devices with little hassle. Other features, such as app thinning for developers, will also help free up space on devices by installing only the necessary app assets for each device.

BreuerEditor
But the REAL question is does it put the data back for the app(s) or just reinstall the app?
Score: 22 Votes (Like | Disagree)

greg8799
I'm still waiting for Apple to increase the iPhone's storage. Why not drop the ancient 16GB and finally start at 32GB?! Now that would be a better solution.
Score: 11 Votes (Like | Disagree)

Twimfy
Now that is quite a cool idea.
Score: 11 Votes (Like | Disagree)

soupcan
If they only did this for some of the stock iOS apps nobody ever uses, and then permanently. If I want to "Find my friends" I'll install the app when I need it, thank you.
Score: 8 Votes (Like | Disagree)

Friday July 30, 2021 9:04 am PDT by Sami Fathi
Tesla CEO Elon Musk reportedly once demanded that he be made Apple CEO in a brief discussion of a potential acquisition with Apple's current CEO, Tim Cook. The claim comes in a new book titled "Power Play: Tesla, Elon Musk and the Bet of the Century," as reviewed by The Los Angeles Times. According to the book, during a 2016 phone call between Musk and Cook that touched on the possibility of ...
Read Full Article • 190 comments