In today's fourth OS X 10.10.4 beta, Apple made a significant behind-the-scenes change that could result in improved networking performance for some users -- the removal of the "discoveryd" process. As noted by MacRumors forum members and 9to5Mac, in OS X 10.10.4 beta 4, the discoveryd process has been replaced by mDNSresponder.

Since OS X Yosemite debuted in October, there have been ongoing complaints about discoveryd consuming CPU resources, draining battery life, and causing issues with Wi-Fi. These problems have lingered for several months, even after multiple bug fixes and performance improvements included in OS X 10.10.1, 10.10.2, and 10.10.3. 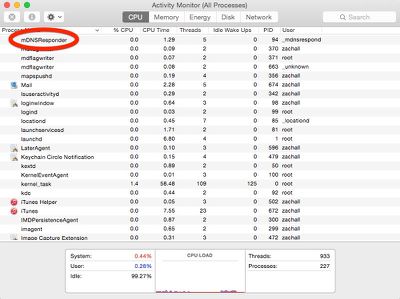 Discoveryd was introduced with OS X Yosemite, replacing mDNSResponder for managing Mac networking tasks, but it's led to a host of problems like those listed above along with issues like slow wake from sleep, failures to resolve DNS names, duplicate machine names, and more, as detailed in a post earlier this year by Ars Technica. Several developers have also complained about discoveryd in Yosemite, including Instapaper's Marco Arment and Iconfactory's Craig Hockenberry.

It's no secret in the tech community that discoveryd is the root cause of so many problems. There are even crazy workarounds. With so many issues, you'd expect some information from Apple explaining ways to mitigate the problems.

The removal of the unstable discoveryd process in OS X 10.10.4 beta 4 may improve network stability problems for many users who have been experiencing continual issues. With the removal of discoveryd, Apple has reverted back to using the earlier mDNSresponder process that was used before discoveryd was implemented with OS X Yosemite.

I haven't updated my OS since the last 10.6 came out, because there are no compelling new features they've added, but there have been compelling new bugs to be avoided.


Not having an OS riddled with security vulnerabilities would be a compelling feature to me.
Score: 43 Votes (Like | Disagree)

motulist
I haven't updated my OS since the last 10.6 came out, because there are no compelling new features they've added, but there have been compelling new bugs to be avoided.
Score: 19 Votes (Like | Disagree)

I think this says quite a bit on Apples management and QA. Having to roll back older versions of software, to fix newer releases, that has to hurt a lot.

Now, if they also roll back 10.6.8, with security fixes, then I'll be happy. I can live without all the extra fluff later versions added.


Seriously, ever since Lion, the quality of the desktop software has been going down significantly and the features have been more and more redundant and insignificant. Here's Mavericks for me:
_ file sharing doesn't work as it should and connecting to servers other than by doing cmd-K is a lost cause. Forget about keeping shortcuts in the Finder.
_ Quicktime doesn't work with anything else but .mov, it's ridiculous
_ QuickView, by extension (with the whole missing QT API documentation, no support for Perian, missing third-party codecs thing) won't preview any video other than .mov and .mp4
_ Airdrop has never worked with me

The state of iTunes is just sad. The worst software ever made as the centre of your media and devices! Saying that it's not intuitive and convoluted would be the euphemism of the year. Friends with many years on Apple products, and regular iTunes users, keep asking me "hey, how do I add music to my phone?". It's not funny! Properly backing up your photos has to be done outside the app, and disabling seemingly unecessary cloud services threaten to wipe out your phone! All of these things should be simple and straightforward.

None of the new features of recent OS X iterations make my workflow any easier or faster. However, the bugs slow me down.

10.6.8 is so far, undeniably, the gold standard in efficiency in OS X workflow. And I should know, I've been on this train since MacOS 6!

As much as I love social media features on my phone, they should not be significant additions to our desktop OSes. All these "new features" shows how little Apple now understands its desktop user-base.
Score: 15 Votes (Like | Disagree)

antonis
So all these people complaining about wifi issues were right, from the beginning.
Score: 11 Votes (Like | Disagree)

charlien
Thank you. I may install the beta just for this.
Score: 10 Votes (Like | Disagree)
Read All Comments

Monday January 24, 2022 9:20 am PST by Juli Clover
AT&T today announced the launch of upgraded AT&T Fiber plans, which support speeds of up to 5 Gigabits for some customers. There are two separate plans, one "2 GIG" plan and one "5 GIG" plan, available to new and existing AT&T Fiber subscribers. According to AT&T, the new plans are available to nearly 5.2 million customers across 70 metro areas including Los Angeles, Atlanta, Chicago, San...
Read Full Article • 262 comments