Begun in 2012 over a concern that Samsung's products willfully infringed on Apple's patents for the iPhone, a jury eventually ruled largely in Apple's favor and the Cupertino company was awarded over $1 billion in damages. The award was later slightly reduced after it was determined the original jury had erred in one portion of its decision, but Samsung was still owing roughly $900 million to Apple.

Today, however, a U.S. appeals court is ruling to reverse another significant portion of the judgment, finding Samsung wasn't in violation of "trade dress" and therefore doesn't owe as much as was previously awarded by the courts (via Bloomberg Business).

The exact portion of the case being reassessed amounts to about $382 million according to Samsung, leaving the Korean company still owing Apple $548 million in damages if the lower courts looking at the case decide to reject this part of the award. The actual award amount will be recalculated by the lower court following today's decision.

The term "trade dress" refers directly to the ways in which a product is packaged and presented, and was originally one of the bigger points of win for Apple when the jury ruled in its favor back in 2012. After Samsung appealed, the appeals court on the case found the iPhone's overall look "can't be protected," thus requiring a recalculation of Apple's estimated $920 million damage award.

The part of the original decision upheld in today's ruling was Samsung's general patent infringement when in comparison with Apple products, including features like pinch and zoom, double tap to zoom, and other basic features patented by Apple. So while Samsung may yet escape without penalty over its phones having a similar look to the iPhone, the company will still be required to pay for violating Apple's patents.

The next part of the case is in limbo as a lower court recalculates the $930 million in damages owed by Samsung. The $382 million of that $920 million awarded to Apple, regarding the trade dress, is what will be addressed specifically by the lower court, with the amount being either lowered or removed altogether from the overall sum.

Kaibelf
Samsung didn't violate trade dress? LOOK AT THEIR PACKAGES AND STORES! Is the judge blind, or just stupid? 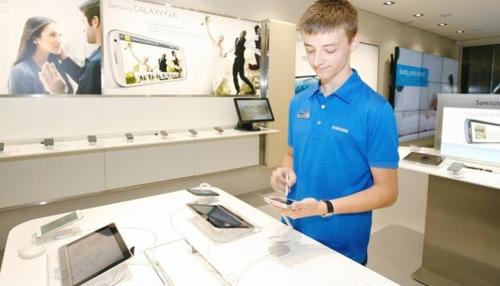 Is the color white copyrighted?


No, but the fact that you actually asked that question thoroughly demonstrates your ignorance on the topic.

Hint: Trade dress has nothing to do with copyright.
Score: 16 Votes (Like | Disagree)

Samsung didn't violate trade dress? LOOK AT THEIR PACKAGES AND STORES! Is the judge blind, or just stupid?


Is the color white copyrighted?
Score: 16 Votes (Like | Disagree)

BornAgainMac
One good thing Samsung showed Apple is that the larger phone can improve sales. I don't know if Apple would have discovered that on their own.
Score: 16 Votes (Like | Disagree)

You mean, the way that Apple switched their packaging to look like LG's, so the iPhone would be at the top?

Or the way that Apple uses Samsung blue for their Apple Store shirts instead of Apple colors.

Those are shape and color choices, not unique inventions.

Is the judge blind, or just stupid?

Part of it might be that the appeals court judges know more than even the juries. For example, they have access to all the prior art evidence that Apple got banned from the trial. Such as:

Such evidence caused Apple to lose trade dress and design trials in other countries where it was allowed. (It also later helped this same group of appellate judges deny a post-trial Apple request to ban Samsung's phones.) No wonder Apple didn't want a jury to see any of it.

But more importantly in this case, it was the fact that Apple could not prove that their claimed trade dress wasn't functional.

So what's the difference between a design and utility patent then?

A utility patent is for a functional method or implementation. E.g. a new way to connect an outboard motor engine to its propeller. Or a way to recognize a finger versus a cheek on a touchscreen.

A design patent is given for artistic attributes that are ornamental instead of functional. E.g. the exact shape of the outboard motor engine casing, or the exact shape of a phone bezel. Any part that's functional is NOT patentable on its own. E.g. rounded corners cannot be patented, because they also serve a function of preventing injury or making a device more pocketable.

Hmm...still seems odd to me that they'd uphold the design patent infringement but say there was no trade dress. To me the two are very similar.

Usually, trade dress infringement would require Apple to prove that a normal consumer, spending on average a couple of hundred dollars, was fooled into thinking that Samsung's products were made by or approved by Apple.

In this case, the judges decided that much of Apple's designs had functional elements (something that Australian judges had already done a few years ago, btw), and thus didn't even rise to the point of being trade dress at all.
Score: 11 Votes (Like | Disagree)
Read All Comments