Apple today began sending out emails to iOS developers, offering them a chance to purchase a 42mm Apple Watch Sport with a Blue Sport Band that has a guaranteed shipment date of April 28, 2015, in order to get them a device to begin testing apps on. Quantities of the watch are limited, and developers eligible to purchase a watch will be chosen by random selection. 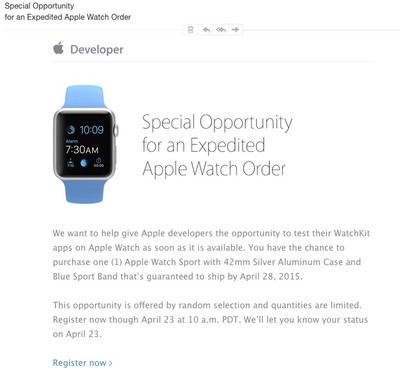 We want to help give Apple developers the opportunity to test their WatchKit apps on Apple Watch as soon as it is available. You have the chance to purchase one (1) Apple Watch Sport with 42mm Silver Aluminum Case and Blue Sport Band that's guaranteed to ship by April 28, 2015.

This opportunity is offered by random selection and quantities are limited. Register now though April 23 at 10 a.m. PDT. We'll let you know your status on April 23.

It's not known why Apple is offering that particular watch combination to developers, but it can be assumed that the 42mm Aluminum Apple Watch Sport may be one of the devices that the company has an ample supply of, along with the Blue Sport Band.

Confirmation screen after entering the lottery
A guaranteed April 28 delivery means developers who make a purchase will receive the Apple Watch Sport one week from today and four days after customers are expected to begin receiving the first Apple Watch devices.
[ 200 comments ]

Let the rage begin!!!
I mean I know devs need the kit to build better apps, they need it more than I do...
but since this is the exact model I ordered with a june delivery....let the rage begin!!!!!
Score: 13 Votes (Like | Disagree)

/dev/toaster
As a registered dev (and one working on an app) I wish I had known this sooner LOL.

Oh well, mine is already on the way. But I am super happy to see Apple doing this. Developers are critical for a new platform.
Score: 11 Votes (Like | Disagree)

b0nd18t
WOW you get a chance to BUY a predetermined size and color apple watch, :apple: you're too kind
Score: 9 Votes (Like | Disagree)

I am a long-time registered Dev with apps on the App Store and here is what it says on that page for me:

Apples arrogance and intrinsic need to continually treat those outside of their secret circle with careless disregard is blatantly obvious with this news.

It's a little late for Apple to be offering what they've likely had ready sooner than now, to those who need them as a tool to do their job. Bad Apple.
Score: 7 Votes (Like | Disagree)

ethanwa79
I am a long-time registered Dev with apps on the App Store and here is what it says on that page for me:

Sunday May 9, 2021 2:00 am PDT by Sami Fathi
Zoom, a hallmark platform used by millions during the global health crisis, has been given access to a special iPadOS API that allows the app to use the iPad camera while the app is in use in Split View multitasking mode. This case of special treatment was first brought to attention by app developer Jeremy Provost, who, in a blog post, explains that Zoom uses a special API that allows the...
Read Full Article • 261 comments