Apple Online Store Down Ahead of Apple Watch Pre-Orders

Apple has taken its online store down to prepare for the launch of Apple Watch pre-orders, as it often does ahead of a product launch. Pre-orders for the Apple Watch are expected to begin at 12:01 AM Pacific Time or 3:01 AM Eastern Time in the United States. Orders for the MacBook, which goes on sale on April 10, may also kick off at 12:01 AM PT when the store comes back up. 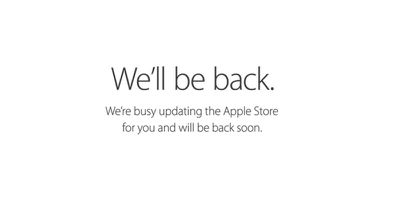 Apple will accept online orders for the Apple Watch both through its website and through the Apple Store app. Apple's head of retail Angela Ahrendts made an announcement earlier today to let prospective buyers know that supplies of the Apple Watch are likely not going to meet demand, so users hoping for the earliest delivery dates should plan to order right as pre-orders become available.

Information obtained from the German Apple Store app earlier this week has suggested that some models of the stainless steel Apple Watch may be so limited that they won't ship by April 24, but it remains unclear if that was an early estimate or a shipping estimate applicable only to Germany.

Still, buyers should be prepared to possibly encounter estimated delivery dates that could be as far off as June for some band choices, including the Modern Buckle, Leather Loop, and Link Bracelet. Edition Watches may ship in May.

If you're still trying to figure out which Apple Watch to buy, check out our Apple Watch Buyer's Guide and our Buyer's Guide video, which is available below. They'll give you a rundown on all of the available options and some things to take into consideration when choosing a watch.

iCore24
No one order a 42mm Apple Watch Milanese until I order one first!

Lottttaaaaa suckers about to be made. :p

I get 75-100 phone calls a day as well as a multitude of text messages and emails. The ability to glance at my wrist and see if the notification warrants my attention without having to pull my phone out of my pocket is priceless.

The thing about change is that it's gonna happen with or without *you*. :rolleyes:

I really cannot understand why some of you are going to waste your money on this horribly overpriced piece of tech. Don't get me wrong, I am a huge Apple fan. I have spent tens of thousands of dollars on Apple products in my lifetime, but I just don't understand how they are getting away with the pricing on these things. I have money. I live very comfortably and could easily waste money on their most expensive watch. Money is not an issue for me. I refuse to give my money to Apple for even the cheapest version of this watch. I just don't see what all the excitement is about. :confused:

PS: I'm not making personal attacks on your choice to buy this thing. I hope you don't take my post personally. I am just sincerely confused at what the excitement is all about. Yeah it looks cool and wouldn't mind having one, but for the price... I just don't see it. Especially when you add in the cost of any of the bands. I truly hope you find value in the decision you are about to make.

Apple is really going overboard this time. It's almost kinda embarrassing that people are actually going to pay the prices that Apple has set on these things :eek:

I get 75-100 phone calls a day as well as a multitude of text messages and emails. The ability to glance at my wrist and see if the notification warrants my attention without having to pull my phone out of my pocket is priceless.

The thing about change is that it's gonna happen with or without *you*. :rolleyes:
Score: 6 Votes (Like | Disagree)

Looks like a ton of interest in this release! Am I the only one that is going to wait a year and get the next generation? I'm thinking these are pretty spendy coupled with being the first generation.
I'm betting we will see significant improvements in the next round.


I'm sure you're not the only one but I have had every release of the iPhone and it has been very nice taking the ride. Someone will buy your first gen so you can move to the second.
Score: 5 Votes (Like | Disagree)
Read All Comments