Wired earlier this morning posted an interview with Apple Human Interface Chief Alan Dye, in which Dye discusses a few lesser-known details of the Apple Watch, specifically giving Wired an inside look at the obsessive level of detail that went in to making each of the Watch's customizable faces. 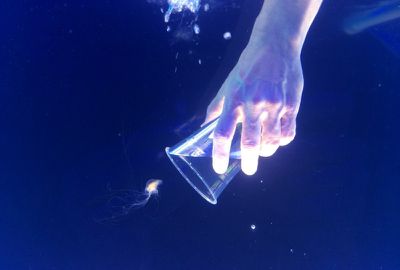 An Apple designer works to capture a jellyfish for a photograph in Apple's design studio
During the interview, Dye elaborates on his team's enormous talent, but says what makes them work so well is that they "really care" about what they create. Echoing back to Steve Jobs' creative concern over every bit of minutiae within any one of Apple's products, Dye begins discussing the process of capturing a simple flower bloom for one of the Apple Watch faces.


Yet what Dye seems most fascinated by is one of the Apple Watch’s faces, called Motion, which you can set to show a flower blooming. Each time you raise your wrist, you’ll see a different color, a different flower. This is not CGI. It’s photography.

“We shot all this stuff,” Dye says, “the butterflies and the jellyfish and the flowers for the motion face, it’s all in-camera. And so the flowers were shot blooming over time. I think the longest one took us 285 hours, and over 24,000 shots.”

The same goes for the jellyfish face, which was captured by the team after building a tank within the design studio and shooting a variety of different species at 300 frames-per-second with high-end Phantom cameras. The resulting 4096 x 2304 images were shrunk down to fit the Watch screen, Dye noting “when you look at the Motion face of the jellyfish, no reasonable person can see that level of detail. And yet to us it’s really important to get those details right.”

A look at Apple's detailed process in photographing jellyfish, butterflies, and flowers for the Watch.
The Mickey Mouse face features a similar level of detail, with the popular mouse's feet tapping in exact rhythmic beat to a one second count. Dye claims that if one were to line up 100 Apple Watches with the Mickey face on, his foot would tap in perfect unison on each one. The astronomy faces are some of Dye's favorites, however, with the Apple chief noting how hard the team worked to perfect the Earth and Moon's daily orbits and cycles.


Dye points out the subtlety of this face. “When you tap on the Earth and fly over the moon: We worked really hard with our engineering team to make sure the path you take from your actual position on the Earth to where the moon is and seeing its phase, is true to the actual position of the Earth relative to the moon.”

Wired interviewed both Dye and Apple vice president of technology Kevin Lynch earlier in April, with the two providing some behind-the-scenes knowledge on everything from the origins of the Apple Watch to the reasoning behind the look of the fitness-related medals.


I think people are misunderstanding skeuomorphism, which is about real world features represented on a screen. Stitches in leather, shadows under watch hands, torn paper calendars etc.

3D emoticons and hands are not skeuomorphic.

Mind you, I totally agree, those emoticons are horrible and the worst thing about the Watch. I like the fitness rings though.
Score: 11 Votes (Like | Disagree)

Michaelgtrusa
Some quality people at Apple.
Score: 8 Votes (Like | Disagree)

So, skeuomorphism is back?


A photo or movie on a screen isn't skeuomorphic. I think they're nice and just show the attention to detail within the RandD of this Watch
Score: 5 Votes (Like | Disagree)

kagharaht
I for one appreciate the level of detail that Apple does for their products. Some blows it off as a waste of time and effort. Thats fine, everybody is different. For me, I love it. The fit and finish of Apple hardware products is astonishing.
Score: 3 Votes (Like | Disagree)

AngerDanger
As impressed as I am by the level of detail strived for with the photography, this doesn't seem to be nearly as amazing:

The Mickey Mouse face features a similar level of detail, with the popular mouse's feet tapping in exact rhythmic beat to a one second count.

The exact second? Is that feat even possible in a watch?
Score: 3 Votes (Like | Disagree)
Read All Comments