When Apple launched the iPad Air 2 and the iPad mini 3 in late 2014, many people were disappointed with the iPad mini update, which essentially just added Touch ID to the existing iPad mini 2 with no other external design changes. Since then, there have been a few rumors suggesting Apple is working on an iPad mini 4 update that includes iPad Air 2 design elements like a thinner body.

French site Nowhereelse.fr [Google Translate] today shared a video and some images of what's said to be an early version of the rear casing for the upcoming iPad mini 4.


The aluminum shell closely resembles the shell of the existing iPad mini, but it does include several design elements introduced with the iPad Air 2. There's a single row of larger speaker holes alongside the Lightning port at the bottom of the device, rather than two smaller rows, and the mute switch on the device has been removed and replaced with a microphone hole. 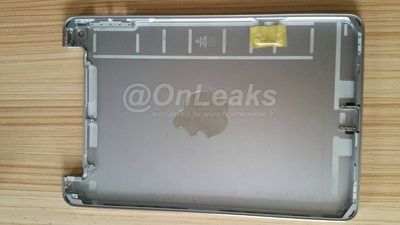 There's been little word on when an updated iPad mini might launch, but given Apple's historical fall release schedule for iPads, it's unlikely we will see the iPad mini 4 until the later months of 2015.

What can't you do with the current iPad right now due to RAM restrictions? Give three examples.

sonicrobby
If Apple does not put in 2GB of RAM, then they shouldnt even bother with it.
Score: 14 Votes (Like | Disagree)

DavidTheExpert
I wish they would come up with a more consistent naming convention for the iPads....

iPad Mini 4 alongisde the iPad Air 3 at the launch of iPhone 6S and a revamped iMac 5k?
Score: 10 Votes (Like | Disagree)

coolfactor
I can't keep up with these product releases... they all become a blur.

If Apple does not put in 2GB of RAM, then they shouldnt even bother with it.

And as soon as they do, you'll come out saying that 4GB is what they should've put in.

What can't you do with the current iPad right now due to RAM restrictions? Give three examples.

More RAM is akin to a bigger gas tank.... would you rather a car engine that was super-efficient, or one with a giant gas tank? Apple strives for super efficient.

(yah, I know RAM-to-gas tank comparison is not the best... but you get the point... bigger specs does not always mean better... because software just gets more bloated and requires higher specs, and on it goes... never being happy)
Score: 7 Votes (Like | Disagree)

BCWorld
WOW! I didn't see this coming!! Classic Apple: release a BS Product one year, then the next year, re-release it with "new and improved" specs. :mad::rolleyes:
Score: 6 Votes (Like | Disagree)

ttss6
That's more like it. Now just add a display with a much improved color gamut and A9/M9 chips and I'll be very interested!
Score: 6 Votes (Like | Disagree)
Read All Comments