StackSocial began offering eight Mac apps in its "Ultra-Premium" bundle today, which includes Cultured Code's Things 2, an Apple Design Award winner, and Realmac Software's Typed, which was just released in December. The bundle is priced at $44.99, but StackSocial is offering MacRumors readers a $5 discount with coupon code MRULTRA5, bringing the price down to $39.99. 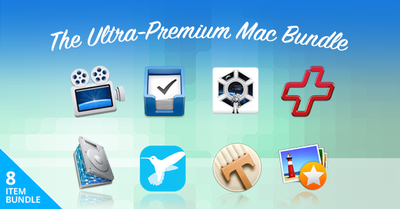 The total retail value of all eight apps is $469, so the bundle at $39.99 offers a significant savings compared to buying each app individually. The apps included are:

Civilization: Beyond Earth was originally announced for Mac last April and debuted in the Mac App Store in November. ScreenFlow previously won an Apple Design Award several years ago.

The Ultra-Premium Bundle is available until March 5.

Is ProSoft any good?


I've had urgent needs to use both the original Data Rescue and Data Rescue II on several occasions in the past 10 years. That program has saved my bacon several times and in the couple of times that it wasn't able to restore a badly crashed disk, I was able to at least get some important files off of the drives.

I used to buy that program to keep around even if I didn't have an immediate need for it. I finally left the habit of always keeping a copy upgraded when I started using Time Machine to keep regular updates.

I already need to get an upgrade to my ScreenFlow software, which would run $34 normally. An extra $6 to also get Data Rescue? I'm in.
Score: 2 Votes (Like | Disagree)

0004838
Actually, according to the Ts & Cs, licence resale is prohibited. Check the foot of the bundle webpage. Though, in the EU, the Courts have decided that licence resale cannot be limited (http://www.cnet.com/news/eu-court-sale-of-used-software-licenses-is-just-fine/).

Also, in their editorial about the bundle, the author writes:

This one will go really quick.

Given the bundle is for sale for a specific and pre-announced period of time, and given the author neglects to mention this at all, this could be argued to be a pressure-selling technique, which is illegal in the EU.

Additionally, 9to5 either have a flaky comments system or apply censorship: I posted a comment ~24 hours ago mentioning the same things and it's not yet appeared, though an attempt to re-post results in a "duplicate post" warning.

And it transpires Things 2 may shortly be superceded by a new version?

It's the Wild West out here, folks…

Edit: Also, ScreenFlow was in the MacLegion Spring Bundle 2011, as was Prosoft Data Rescue, contradicting the claim that AfterShot Pro 2 is, "the only app included that’s been in a bundle before". I accept they may be basing the claim based on app version; but then, in that case, it's a much weaker claim and hardly worth trumpeting, IMO.
Score: 2 Votes (Like | Disagree)

Just a quick question to those of you that bought this bundle... as far as "Things 2" and "ScreenFlow 5" goes, do you get a code to download the Mac App Store versions of these apps or is this a serial number for a version that you download from the developers website? Thanks in advance!

Edited to add: Don't lose your serial, especially if buying a code from someone here. It would be a good idea to save the serial in 1Password or the like.
Score: 2 Votes (Like | Disagree)

You hassle me over this? Lighten up.


I'd have hassled you too. This is a high quality bundle. If the titles aren't right for you, move along. If you want it for $10... good luck with that.

I just remembered another reason to have Data Rescue. It also retrieves images from corrupted camera cards. I've had to use that a few times too and that's not something you can Time Machine your way out of.
Score: 1 Votes (Like | Disagree)

I'm not buying it. Bundle's too expensive, even on sale.


Where do these people come from? They're all over these boards now.

If something costs more than you want to pay, you don't buy it. Simple as that. It's not for you. Why complain about it?

It's got to be the culture with kids/teens. Because back 20 years ago, people would sometimes inflate what they paid for something to impress people. It seems the opposite now - tell someone you won't buy something because it's too expensive (even if it's $1) to impress someone. Weird.
Score: 1 Votes (Like | Disagree)

Anyone have any thoughts about how well After Shot Pro 2 might fare as an Aperture replacement? I took a quick spin around and I like the simplicity of it... haven't really tried to use it yet though.

I'm going to have to decide if I'm hopping on the Lightroom bandwagon in the coming months or if I'm going to hitch my wagon onto something that isn't subscription based.

Looking at the features list, it doesn't seem to have the Aperture features which Photos is missing (brush-masked edits, etc, although I think they are likely there in the layers support, just not listed in the marketing materials), nor obviously the seamless import from an existing Aperture library. Finally, it is cross-platform, and Corel is Windows-first so the Mac experience is going to have some rough edges (not unique in this aspect if you are considering Lightroom, but compared to moving to Photos when that comes out I think you'll hit a lot of fit-and-finish anachronisms).

There are reviews out there. This one is for the previous version (retailing at $99.99 in 2012) comparing it to Lightroom and Aperture 3: http://www.digitalcamerareview.com/default.asp?newsID=4945 - that is where I learned about After Shot's layers support (as well as its over-reliance on it for healing etc, at least in the first version).

On the down side, the reviews in the Mac App Store are minimal (only 2) and both abysmal. So, really, you want to try this one out with the trial download from Corel before forking over the cash.

IMHO, it is likely worth a download to try, and if you like what you see at all, this bundle is a good place to get it (and some other apps) at a nice discount. That said, it is not a Mac App Store app from this bundle (as with any bundle), so you forgo the convenience of the Mac App Store forever with it. Also, if you buy it from Corel you get licenses for WinZip (obviously only useful if you also have a Windows box) and some slideshow app along with AfterShot Pro 2 for $60 - think of that as an alternate bundle if for some reason those apps appeal to you more than the ones here and the extra $20 makes sense to you.

Finally, if you have more than one machine, the non-Mac App Store purchase only allows you to activate the software on ONE machine. So, if you want this for two or more machines you will need two or more licenses and will need a new license every time you upgrade your machine (according to Corel's support pages). Corel is still an old-school software company in this regard, it seems. It is almost enough for me to say you are crazy buying it outside the Mac App Store!
Score: 1 Votes (Like | Disagree)
Read All Comments