Anki today announced a sequel to its innovative iOS-compatible Anki Drive slot car racing game. Called "Anki Overdrive" and set for launch in September, it will include brand new cars, a customizable track - courtesy of magnetically interlocking track pieces and "bridges" that adjust track height - and even jump ramps (via Re/code).

Originally debuted on stage at WWDC 2013, Anki has slowly grown support for the original Anki Drive by adding new cars and track support but keeping the same basic static roll-out mat technology. The sequel, which the company plans to announce today at the New York Toy Fair, will retain the same basic concept of using a smartphone to control a physical toy car around a track, battling against an A.I. opponent or other players. 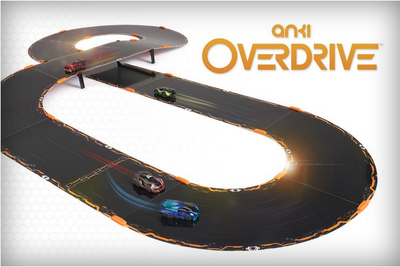 The Anki Overdrive starter kit, which will retail for $150 and come with two cars, will include 10 modular track pieces that the company says can create up to eight different track options out of the box. They'll also be selling "expansion packs" that will give users the ability to add four way intersections, U-turns, and jumps into the mix. Those expansion packs will cost between $10 and $30, and additional cars will be around $50.


The team has boosted the software component, as well. Talking to Re/code, Anki co-founder Hanns Tappeiner said when the cars interact with a new, user-made track, they'll drive slowly and cautiously as they "map" the track to their memory, after which they'll begin speeding up. Tappeiner also highlights the potential for user imagination in weaving tracks around everyday household objects, not just limiting users to designated objects provided by Anki.

Tappeiner and I combined the pieces from two of the starter kits to make one criss-crossing mega-track stretching across a conference table. As advertised, we were able to use the stuff already on the desk — soda cans, water bottles, computer cables — to buttress the rising and falling pieces of the track.

Tappeiner also promised the much-loved meta game of advancing player levels - courtesy of the Anki Drive [Direct Link] companion app available as a free download - as you race and battle around tracks will remain firmly intact with Anki Overdrive. “Even though it’s a physical thing, we think of it as a video game,” Tappeiner said. “If this were a video game, every time you advanced a level you’d be in a different world.”

BTW
Our slot car track lasted over 10 years. My youngest brother is 7 years younger than me. In time the track was put in a closet in full working condition. My parents are still living but now in a condo. They can't remember what happened to the track.

I am 57 years old and a pastor of a church. I am planning to buy an Anki set for my personal use with my own money. I MAY share it with the church youth. :)
Score: 4 Votes (Like | Disagree)

taptic
Very cool toy, but still just a toy for a lot of money.
Score: 4 Votes (Like | Disagree)

I am from a working class family. Come Christmas my brothers and I would drool over the Sears Wish Book. I was 10 and it was 1967. My parents gave us each a $20 limit on picking one toy to get from "Santa"...

Its a cool product but I don't know how well its been selling. Its a little too pricey for my budget.

I am from a working class family. Come Christmas my brothers and I would drool over the Sears Wish Book. I was 10 and it was 1967. My parents gave us each a $20 limit on picking one toy to get from "Santa".

I did the math. Today that $20 is worth $141 which is very close to the price of Anki. I don't remember what I got. However, I am sure it wasn't as cool or a long lasting as Anki.

In the early 1970's my brothers and I got a joint Christmas gift in a large 1/32 slot car track. We loved it. I don't know the price but I bet adjusting for inflation it was more than Anki.
Score: 2 Votes (Like | Disagree)

Very cool toy, but still just a toy for a lot of money.