Thursday January 8, 2015 6:08 pm PST by Husain Sumra
While Apple is rumored to be aiming for March as the launch month for the Apple Watch, Chinese company Hyperdon was at CES selling fake versions of the new Apple product called Smart Watch, according to Mashable. 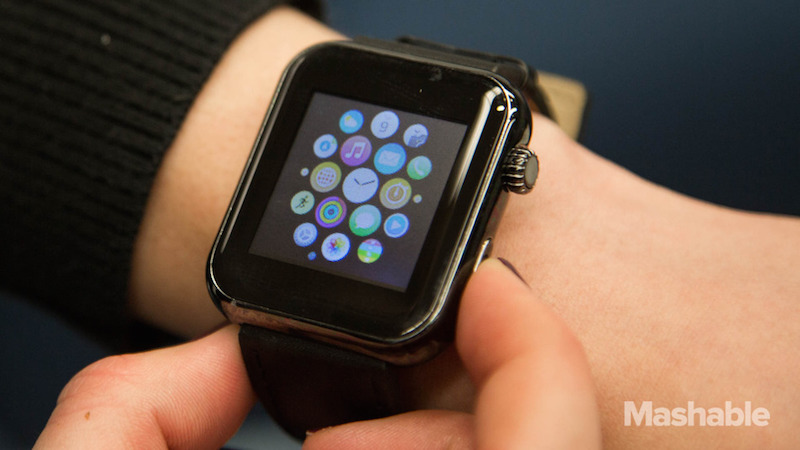 The watch's screen only displays when it's turned on, and many of its icons are blatant ripoffs of Apple designs. The pairing process took a few tries, but once connected to my iPhone 6, I was able to make phone calls and play music through the watch. It even vibrates when I get a call.

Mashable was able to purchase the watch for $27. It comes with a pedometer, stopwatch, alarm and a feature referred to as "Anti lost", which Mashable estimated could be used to alert a user to when the watch is out of Bluetooth range.

The Smart Watch also has notifications from WeChat and other apps, but it requires downloading a "sketchy-looking APK" that appears to only work with jailbroken iPhones. It charges via USB cable and Hyperdon claims it can last for "up to 180 hours". Mashable was not able to test this claim. Hyperdon says it sells its products in retail stores in the U.S. and China, but did not detail where its locations are.

Apple has continually suffered from counterfeit Apple products in China, with authorities breaking up counterfeit iPhone rings and shutting down fake Apple Stores.

Why is it an embarrassment? Because a company has managed to produce the product for $25 that Apple will be charging 20 x that for?


I just logged in to say that your comment just shows how ignorant you are of how a final product such as the Apple Watch gets its final price. The price you pay includes years of research, development, which again intrinsically include design, prototyping, machines, countless man hours, the very same again for the accompanying software. Potatohead thieves can blatantly rip these off and sell inferior plastic junk (eg. Samsung) for 1/20th the price, because they didn't have to do any of these.

If you don't understand product development and business management, I'd suggest you refrain yourself from making ridiculous comments about it.
Rating: 70 Votes

Why is it an embarrassment? Because a company has managed to produce the product for $25 that Apple will be charging 20 x that for?


Right, because Apple's product and this one enjoy so much parity. So we should definitely be comparing the price between the two.
Rating: 48 Votes

not only it looks exactly same as Apple Watch. it only costs 1/15 what Apple wants to gouge you for.


My deepest sympathies over your recent blindness. Let us know if there's anything we can do to help.
Rating: 43 Votes

What an embarrassment for CES and the CES organization
Rating: 36 Votes

What an embarrassment for CES and the CES organization


Why is it an embarrassment? Because a company has managed to produce the product for $25 that Apple will be charging 20 x that for?
Rating: 32 Votes

wetcanvas
I knew samsung would be there.
Rating: 27 Votes

kingofwale
not only it looks exactly same as Apple Watch.

it only costs 1/15 what Apple wants to gouge you for. AND the battery life is 10 times what Apple can do.

Let's be honest, this is probably made in the same factory that's producing AppleWatch.

I don't know why but the picture made me sick.


it's okay, I don't particularly like the look of Applewatch either, but I wouldn't go as far as saying it makes me sick
Rating: 27 Votes

brsboarder
for $25 and 180 hours of battery, probably worth the 1/15th it costs compared to the cheapest iwatch.
Rating: 24 Votes