The latest smartphone sales data released today from Kantar Worldpanel ComTech highlights good news for Apple on the strength of the iPhone 6 and 6 Plus launch, with Apple gaining share year-over-year in every country surveyed except for Japan.

The report, focusing on the September-November 2014 period, points out that Android market share dropped in most European markets and saw its first decline in the U.S. since September 2013. In the surveyed period, Apple reached 42.5 percent of UK sales, up 12.2 percentage points from the same time in 2013. 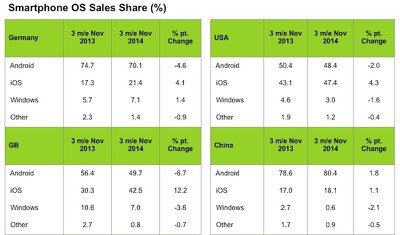 In the U.S., the Cupertino-based company's share of smartphone sales grew 4.3 points to reach 47.4 percent of the market, an unsurprising performance given the strong early sales of the company's latest iPhones. More data from Apple on October-December iPhone sales will be announced later this month when the company releases its quarterly earnings report.

Apple's strong performance is being attributed in part to enthusiasm for the redesigned bodies and larger screens of the iPhone 6 and 6 Plus, with the iPhone 6 leading the smartphone pack during the time period.

“The iPhone 6 was the best selling phone in the three months through November 2014, capturing 19% of smartphone sales”, said Milanesi. Verizon and AT&T made up 57% of iOS sales while Verizon and T-Mobile were the top two carriers for Android accounting for 33.7% of all Android smartphones sold.

Despite declines in many markets, Android remains the dominant platform in Europe with 69.9 percent of the market, although that number is down 3.2 percentage points from the same period in 2013. Kantar also notes that customers switching from Android to iOS remained at a steady 18 percent from 2013 to 2014, suggesting Apple's larger-screened phones have yet to represent significant motivation for switchers.

TopToffee
I always find it staggering when I see the UK figures.

Though I suppose that could be influenced if iPhone users just spend longer actually USING their phones than Androiders
Score: 14 Votes (Like | Disagree)

I always find it staggering when I see the UK figures.


That is right. Many Android phones are bought by folks who don't use their phones very much. It makes sense for those users to save money and buy a slightly gimped product. For the phandroids, I'm not talking about the flagship Androids, I'm talking about the no name smaller devices. Those phones just sit in pockets and you don't see them.
Score: 12 Votes (Like | Disagree)

These numbers mean nothing in 2015.

lkrupp
What amazes me is that Apple has chosen to leave the low end to the Android universe and yet commands this kind of market share overall. One would think the high end would limit Apple’s presence to also-ran but the opposite is true.

The only success metric the competition can tout is market share. Apple controls the rest of those metrics by a wide margin. Developers are still, to this day, iOS first and Android later. This is NOT the Windows/Mac debacle of the 90’s in terms of software availability. The talking heads were wrong and the Fandroids here on MacRumors are left with touting the TOTAL OEM output of all manufacturers when making their point.
Score: 8 Votes (Like | Disagree)

The number that always confuses me is Germany. Why does Android do so well there and iOS do so poorly? I understand in China it's because most people there have relatively little discretionary income so buy cheaper products, but my understanding was Germans were comparable to those in the UK and US in terms of discretionary income. Is there a major German phone manufacturer that many Germans buy out of national pride or something? I thought the major Android manufacturers were all either Asian or US.

Probably because in Europe (or in most European countries) users are exposed to the phones true price and Apple's phones are in reality very expensive.

Nowadays no phone is that good to deserve that premium expecially in Europe where Apple's services and ecosystem are a lot worse than in the USA. My country doesn't even have Siri... At least the Germans haver that.
Score: 7 Votes (Like | Disagree)

I always find it staggering when I see the UK figures.


It would also be very dependent on where you live, hangout, and work in the UK.

I live in London, and definitely see more android devices on a daily commute.

These numbers mean nothing in 2015.


Historical data is not useful for analytics?
Score: 6 Votes (Like | Disagree)
Read All Comments

Friday July 30, 2021 9:04 am PDT by Sami Fathi
Tesla CEO Elon Musk reportedly once demanded that he be made Apple CEO in a brief discussion of a potential acquisition with Apple's current CEO, Tim Cook. The claim comes in a new book titled "Power Play: Tesla, Elon Musk and the Bet of the Century," as reviewed by The Los Angeles Times. According to the book, during a 2016 phone call between Musk and Cook that touched on the possibility of ...
Read Full Article • 192 comments