The new 500GB Seagate Wireless portable hard drive is the company's latest HD designed specifically for use with tablets and smartphones like Apple's iPad and iPhone, introducing additional storage at affordable price. Available in five bright colors (lime green, cool blue, slate gray, fire-engine red, and white), the hard drive offers a nine hour battery life and the ability to store media like photos and videos, which can be streamed directly to an iOS device through the Seagate Media app. 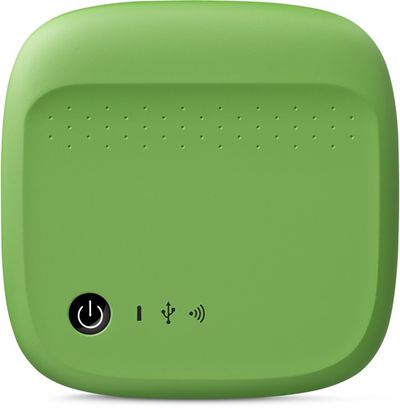 It includes a new auto backup feature for making a secondary copy of photos and videos, and it can be used for storing documents and other file types. Because it has built-in Wi-Fi, the Seagate Wireless does not need an existing network connection. The Seagate Wireless will be available in January for $129.99 from the Seagate website and through retailers like Amazon and Best Buy.

Seagate's second product, the Seagate Personal Cloud, is designed to offer an alternative to traditional server side cloud-based storage. The Personal Cloud allows users to backup their computers (with the Seagate Mobile Backup app) and store content securely on a dedicated hard drive that's located within the home rather than on a server.

Content can be accessed outside of the home much like any other cloud-based storage option through the Seagate Media app, and as a home media storage option, it can stream video and play full HD content with no buffering or lag.

Seagate Personal Cloud demystifies the often frustrating process of finding, accessing and enjoying photos, videos and music on the device of your choice. Once connected to a wireless router and after a free download of the Seagate Media app, users will be treated to an intuitive, media-rich browsing experience that makes playback of content an effortless and enjoyable experience.

The Seagate Personal Cloud can be used with any device that's supported by Seagate Media apps, including Smart TVs from Samsung and LG, many consoles, streaming media players like the Chromecast and Apple TV, and smartphones and tablets like Apple's iPad and iPhone.

Seagate's most notable product this year is the Seagate Seven, which the company is calling the world's thinnest 500GB portable hard drive. At just 7mm thick, it uses Seagate's latest mobile hard drive technology and is aimed at tech enthusiasts who want the thinnest devices. With a steel finish, the hard drive is ultra portable and is, according to Seagate, the culmination of 35 years of experience.

The Seagate Seven will be available at the end of January for $99.99 from the Seagate website and from retailers like Amazon.


the hard drive is ultra portable and is, according to Seagate, the culmination of 35 years of experience.


well I have 26 years of experience of seagate drives failing.
Score: 47 Votes (Like | Disagree)


And a connection speed of only 1-3mbps (very realistic in many hotels across the western and eastern world, from someone [me] who spends 4/7 nights a week in hotels for work), where streaming reliably isn't possible or the iPad caches are too insignificant to maintain the stream well enough
Score: 32 Votes (Like | Disagree)


Imagine that your hotel room comes with reliable wifi, capable of streaming video... welcome to 2020.
Score: 14 Votes (Like | Disagree)


Well you probably own apple products, so complaining about a premium price seems really hypocritical
Score: 14 Votes (Like | Disagree)


Image that free wifi is slower than dial up in 1995. Welcome to hotel free wifi.
Score: 12 Votes (Like | Disagree)

well I have 26 years of experience of seagate drives failing.


Over a period of 26 years, you'd be expecting a lot of hd failures, what's your point?
Score: 11 Votes (Like | Disagree)
Read All Comments