Several iPhone 6 owners on Apple support forums and in MacRumors forums are reporting an issue with Apple Pay after making changes to the their phones that automatically reset the Apple Pay service (via 9to5Mac). These activities include restoring a phone, logging out of iCloud and possibly removing a passcode from the device. 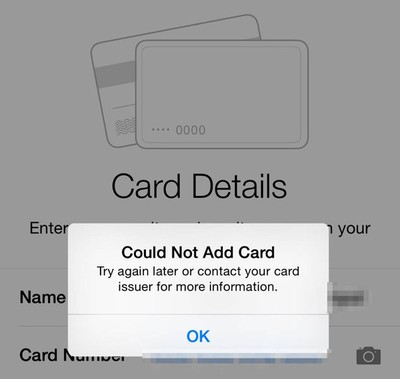 Following such changes, Apple automatically removes the associated credit cards from Apple Pay as a security measure to protect a user's sensitive financial information in case of loss or theft of the phone. Users are then required to repeat the setup process and re-add their credit cards to the mobile payment service. It is during this restoration step, however, that the process fails for some users.

Upon failure, users are greeted with an alert advising them to contact their card issuers. Subsequent calls to banks confirmed the cards not associated with the Apple Pay service, but the phone still fails to accept the card information. Apple support is typically unable to fix the issue and, in many cases, Genius Bar technicians have replace the phones with new or refurbished units in order to restore Apple Pay functionality.

The issue likely involves the secure enclave on the iPhone that stores the Apple Pay information. It is possible that the automatic removal of Apple Pay information does not clear the enclave properly, leaving behind details that block the addition of credit card information. This apparent glitch in the service appears to only affect users who made changes that disabled Apple Pay and removed cards automatically. Users who manually remove their cards are able to add new and previously used cards back to Apple Pay without an issue.

It is not clear how many iPhone 6 owners are affected by this issue. It could be a system-wide glitch affecting all Apple Pay users or an issue with only a small number of iPhone 6 and 6 Plus handsets. Not surprisingly, Apple has yet to comment officially on the matter.

Happy New Year Everybody! I couldn't get an Apple Employee to take my Apple Pay when I was in the Apple Store after Black Friday...


What does that have to do with this article?
Score: 26 Votes (Like | Disagree)

JPSaltzman
Sounds like it's still easier just to get out your wallet and your credit card, swipe it, and sign, and go on your merry way.
Score: 6 Votes (Like | Disagree)

Jazper
Good news for anyone with a bent phone... :D

Genius Bar technicians have replace the phones with new or refurbished units in order to restore Apple Pay functionality.

Altruistic
Hello 2015...are you there Apple Pay?

Happy New Year Everybody! I couldn't get an Apple Employee to take my Apple Pay when I was in the Apple Store after Black Friday...
Score: 5 Votes (Like | Disagree)

It's been so insecure up to now that credit cards will never catch on.


People are so lazy these days.

If your credit card information is stolen, you simply call your card issuer, and they ask you about recent charges. You identify yourself using your mother's maiden name or some similar piece of information and then verify which purchases you actually made. Then you pay with cash or a different card until they send you a new card via Fed Ex. It's so easy and convenient, I don't see the need for a system that makes it difficult for someone to obtain your account information.
Score: 4 Votes (Like | Disagree)
Read All Comments