Apple CEO Tim Cook met with at least one U.S. senator to discuss technology policy during a trip to Washington, D.C. this week, reports The Hill. According to the report, Cook sat down with Utah Senator Orrin Hatch, chairman of the Senate Republican High-Tech Task Force. 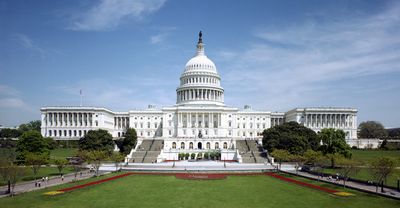 Cook apparently met with Hatch to discuss the senator's innovation agenda for the upcoming 114th Congress, which is scheduled to convene in January 2015. The pro-research and innovation plan addresses several critical technology issues including patent trolls, company trade secrets, and more.

Details of the conversation were not made available, nor is it known whether Cook met with any other senators during his D.C. trip. On Monday, the Apple CEO, along with (RED) CEO Deborah Dugan, dropped by a Georgetown Apple Store in the city to mark World AIDS Day and Apple's contributions toward the (RED) campaign. Both Cook and Dugan tweeted photos from the visit.

Note: Due to the political nature of the discussion regarding this topic, the discussion thread is located in our Politics, Religion, Social Issues forum. All forum members and site visitors are welcome to read and follow the thread, but posting is limited to forum members with at least 100 posts..

Since Tim Cook is a California resident shouldn't he be meeting with his California Senators/Reps?

For 6 years now Democrats in the Senate have been in charge and taunting Republicans by vacuuous rhetoric accusing them of not coming up with ideas, all the time ignoring over 357 bills PASSED in the R House.

The time is upon us for Republican ideas to get actual traction by PASSING bills in both the House and Senate and piling them high on the desk of the President.

Then we will see what the "leader" of the Democrats actually does with ideas Democrats help craft in both the House and Senate.

I predict this Socialist President will do almost nothing.

BTW I have been saying this continuously for years (see sig).


1. Its nice that only 54 of those "Bills PASSED" ware pointless attempts to kill obamacare...:mad:

Since Tim Cook is a California resident shouldn't he be meeting with his California Senators/Reps?


I doubt Tim Cook could stand to be in the same room with California's two odious Senators.
Score: 7 Votes (Like | Disagree)

There IS NO DOUBLE TAX. Simply, you pay local taxes. IF the taxes you pay are less than US income tax, then you pay Uncle Sam the difference.


In other words, you benefit from being American and pay the same taxes as any other American.


*buzzer* WRONG. If you make less than around 70k abroad you don't have to pay US tax, above that you do. So yes there is double taxation.

For 6 years now Democrats in the Senate have been in charge and taunting Republicans by vacuuous rhetoric accusing them of not coming up with ideas, all the time ignoring over 357 bills PASSED in the R House.

The time is upon us for Republican ideas to get actual traction by PASSING bills in both the House and Senate and piling them high on the desk of the President.

Then we will see what the "leader" of the Democrats actually does with ideas Democrats help craft in both the House and Senate.

I predict this Socialist President will do almost nothing.

BTW I have been saying this continuously for years (see sig).

Top fines collected by FEDGOV. It goes into the Treasury without a mandated use, so the President has the mother of all slush funds!


Obama is center right, not liberal and certainly not socialist. A Socialist would have given us single payer healthcare and overturned the 2005 Republican Bankruptcy Law that made all student loans both public and private a lifetime debt.
Score: 6 Votes (Like | Disagree)

How about when Obama and the Democrats accept and embrace a good Republican-initiated idea (hint: Obamacare is but one example) and then the Republicans flip-flop and make up all kinds of fictions ("death panels" anyone?) just to block "the enemy" from being seen to serve the country? Their policy is to oppose everything... and then ober the coming years when Obama's policies do help people in spite of all opposition, they'll gladly take the credit. Time travel at its best! (See also: Obama somehow caused the recession under Bush's adminstration!)

Somebody had to say it :)


There's definitely a pattern there. Remember how a couple of years ago Mitt and his friends were complaining because 47% of Americans were not paying income taxes and therefore (ignoring all other taxes) didn't "have skin in the game"? That was because of the Earned Income Credit-- which was a Republican idea, the concept being that it was an incentive for people to get off welfare and instead work for low wages-- a Republican alternative to welfare. Which, of course, they deny, as it is helping all those lazy "takers."

Then there were all the incentives to help relatively low-income families get mortgages. This was a great idea-- out of the Reagan administration. The idea being that home ownership would give people incentives to fix up their property, and would help to make low-income neighborhoods cleaner and safer. Again, now disavowed by today's Republicans.

Of course, the core concepts of Obamacare came out of a Heritage Foundation paper, which was then implemented by the same Mitt Romney. Now, if you want to be amused, you should look up the history of statements by the Heritage author, as he increasingly disavows his ownership over time-- it's actually quite funny if you trace this.

There used to be a time, not that long ago, that Republicans (and conservative Republicans!!!) actually believes that government could and should help poor people through active policies. The distinctiveness was that they believed big money should not just be thrown at the poor via big government bureaucracies but should be carefully targeted to support clever programs designed to leverage market forces. Now, the Republicans are overrun by people who believe in a pseudo "philosophy", invented by a science fiction writer (ironically an atheist), that low income people are lazy, shiftless parasites for whom poverty is just and deserved.
Score: 5 Votes (Like | Disagree)

I predict this Socialist President will do almost nothing


For better or for worse, depending on one's point of view, Obama is quite the opposite of a socialist president. I'm not sure that's even possible in US politics (or indeed most of Western Europe) given the near universal attachment to neo-liberal free market ideology. Whatever one's leanings, it seems there are certain universal truths to modern 'Western democracies', and that's one of them.
Score: 5 Votes (Like | Disagree)
Read All Comments