Monday November 17, 2014 11:35 pm PST by Richard Padilla
Earlier tonight, KTLA 5's The Tech Report aired a segment (via AppleInsider) centering around Apple Pay, which featured Apple's SVP of Internet Software and Services Eddy Cue using the mobile payments solution around Santa Monica. The segment, which can be viewed here, followed Cue and reporter Rich Demuro as the Apple executive utilized his iPhone 6 Plus and Apple Pay to purchase a meal at Panera Bread, sunglasses at Bloomingdale's, and merchandise from the Disney Store. 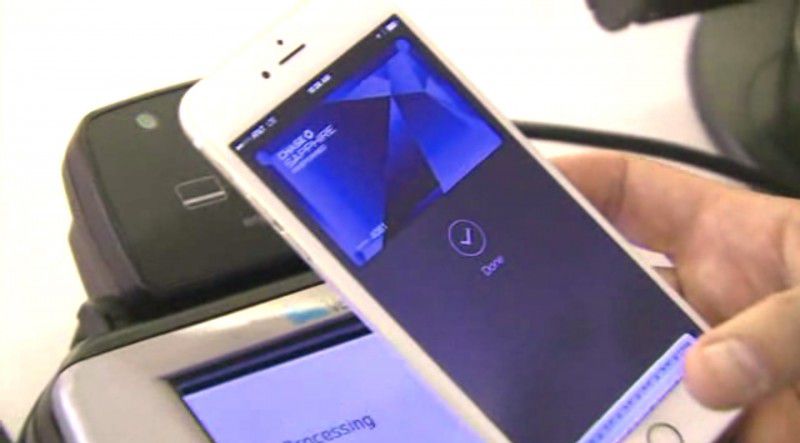 The pair also visit an Apple Store to discuss Apple Pay on the company's new line of iPads. While users can't make in-store purchases with the iPad, Cue points out that users can still make in-app purchases with Apple Pay and Touch ID on the tablet.

Cue also spoke on the security of Apple Pay and how tokenization helps keeps credit card numbers away from malicious users:

You've seen these hacks that are happening in the systems where thousands of credit cards are getting exposed, and so you have try to protect that number. Well, with Apple Pay, the number that's being given to the terminal is a one-time number that's created for that transaction.

A report from The New York Times over the weekend shed some light on Apple Pay's early successes, noting that the service doubled mobile wallet transactions at Walgreens and accounted for 50% of tap-to-pay purchases at McDonalds. Whole Foods shared earlier this month that it processed 150,000 Apple Pay transactions between October 20 and November 6, and the service has increased consumer interest in the mobile payment area in general. Apple currently has 36 retail partners that accept Apple Pay in their stores as the service is available at more than 200,000 retail locations.

Dave532
Having to sometimes sign seems a bit crazy and not how NFC works in the rest of the world (although you may be asked to enter a PIN on random occasions when using a contactless credit card because the credit card has no other way of authenticating).

But what can signing a receipt gain you when using Apple Pay, they don't have a signature to compare to (unless you have to sign the back of your phone :p).

Hopefully this will just be a temporary glitch.
Rating: 13 Votes

wesk702
I really hope this takes off big and becomes mainstream. It's just too easy to use and I actually enjoy spending my digital cash.


Fundamentally I still don't feel, long term this is the ideal payment solution for the masses for all things. It feels more like a short term, very limited gimmick that's never going to be total mass scale cash/card replacement.


Obviously, you haven't had your credit card hacked lately. We've had it twice in the last few weeks. Each time was from a merchant having their local machines hacked. This *does not happen* with Apple Pay. The number is unique to the sale. Ultimately, you don't lose anything, since transactions are refunded. But, you have to discover it, challenge it, wait for new cards to be mailed, and then change your credit card info on everything where that is stored.

For me, this is the one thing that is making me consider upgrading my 5S. I really don't need a bigger screen, but the ability to pay with a method more secure than taking out my credit card and usable even when I forget my wallet is a big draw.

Sometimes you're asked to sign on "big amount". I don't think it's for verification. I think it's fire the bank to have a confirmation that you spend a big amount and on purpose.


Indeed.
But what is a signature? How does writing your name down in any way prove that it was you that wrote it?!
This is a simple flaw in the signature philosophy, that permeates into every legal or financial document we sign.
It is entirely a representation of trust and proceedings, but cant be defended.

Biometrics are the future, and Apple Pay is on that path, thanks to the TouchID fingerprint.
Rating: 4 Votes

alksion
I live in LA and always watch the KTLA morning show. I was very surprised to see Eddy Cue on there, but ultimately, I am just happy to see the interest in this new payment method from the media.
Rating: 4 Votes

As an American in Australia (with American bank accounts, and no-international-fee credit cards), I'm loving ApplePay. It works just fine with PayWave/PayPass, which are basically ubiquitous contactless payment solutions here. I use it all the time with no issues here.
Rating: 4 Votes

I've never seen an Apple SVP do a local news report like this.

As an American in Australia (with American bank accounts, and no-international-fee credit cards), I'm loving ApplePay. It works just fine with PayWave/PayPass, which are basically ubiquitous contactless payment solutions here. I use it all the time with no issues here.


Nice. Considering almost no one in Australia takes AMEX, good to hear you're beating the 'system' against American cards.

Australia has a $100 limit. Requires a pin for anything above that - I think ApplePay needs to beat that, because seriously - a fingerprint is more secure than a 4-digit pin.
Rating: 3 Votes

tigertazz
Glad it's so easy just wish it could be used in the UK where we already use contactless payments in loads of stores
Rating: 3 Votes

Jsameds
I have noticed quite a lot of misinformation about Apple Pay and Google Wallet floating around other forums and sites. The trouble is AP is so similar to use compared to other NFC services that the average Joe thinks they are the same, when in reality they are worlds apart in terms of security and secrecy.

Clarifying the differences between the services is key to AP's success.
Rating: 3 Votes