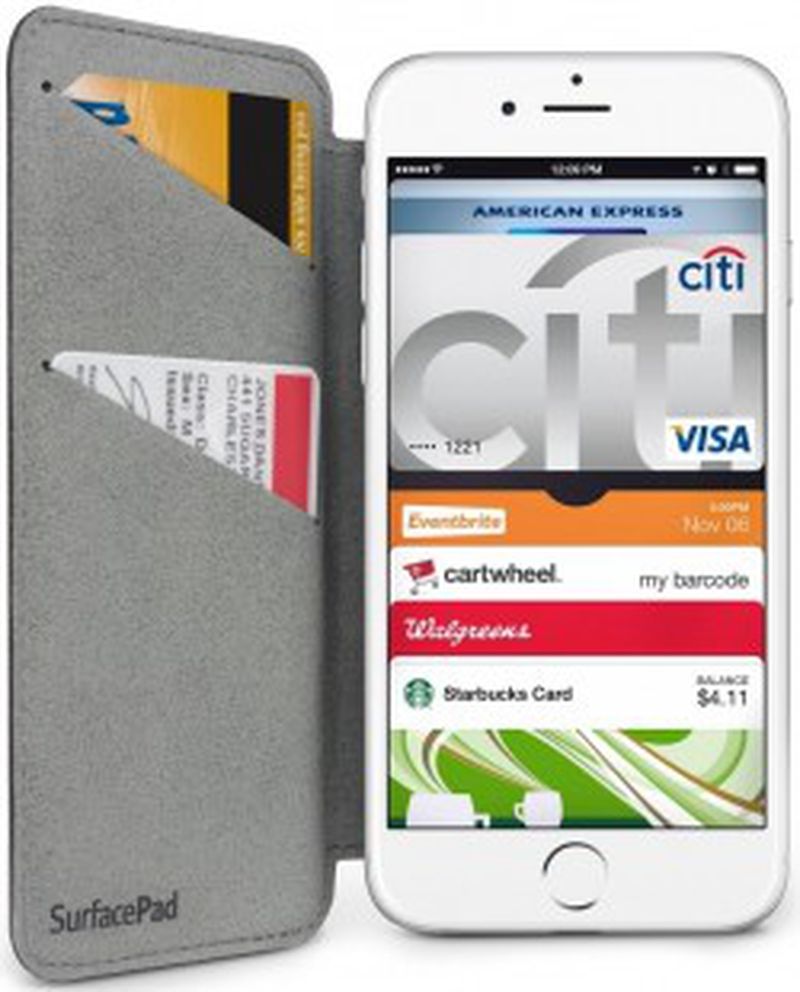 Popular Apple accessory company Twelve South today introduced a new addition to its line of SurfacePad cases, the SurfacePad for the iPhone 6 and iPhone 6 Plus. The leather case is designed for ultimate portability, with an ultra thin folding design and the ability to transform into a hands-free display stand.

The SurfacePad case attaches to the back of the iPhone using the company's "SurfaceGrip technology", which Twelve South claims to allow the removal and reattachment of the case repeatedly.

With two separate slots for credit cards in the front cover, the case bills itself as a companion of sorts to Apple's new Apple Pay feature.

The inside front cover of SurfacePad for iPhone 6 has two slots for cards. Thanks to Apple Pay and Passbook, you can keep your bank cards and tickets on your iPhone and your ID and transit cards in your SurfacePad. Or simply use the slots for an occasional night on the town with your ID and Bank Card. SurfacePad’s two card slots are the perfect complement to your new lighter Apple Pay world.

Fun new features and the big, beautiful Retina HD display give you so many reasons to use iPhone 6 hands-free, that a case without a stand is not an option anymore. Fortunately, SurfacePad’s built-in stand is perfect for watching movies, hanging out with friends on FaceTime, and taking timed group photos. Flex the back of SurfacePad to put iPhone into display mode, and you’ll be ready for hands-free selfies, watching game highlights at the bar or catching a TED Talk in your favorite coffee shop.


The SurfacePad for iPhone 6 is the latest iteration in a long line of SurfacePad cases for Apple products. The company announced a case for the iPad Mini earlier in the year, and already makes cases for older model iPhones and MacBooks. 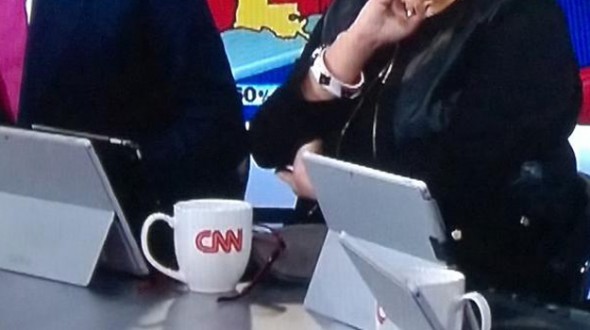 temna
Cute idea, but no protection for the phone, really. If they upgrade it with some form of edge protection, then maybe I would be interested. Looks like a beta fashion accessory more than anything else to me.
Rating: 7 Votes

elmateo487
No edge protection? No thanks. But it looks nice
Rating: 7 Votes

Magnets... directly touching a phone with an HD in it..

Think about that for a moment.


You need a new phone if yours has a hard drive in it.
Rating: 3 Votes

Per the usual, slow relevant iNews. Time to make easy money for tacky ads in the front page.


Eh, I'm not paying to use this website. As far as I'm concerned, Macrumors can do whatever they need to stay afloat. If my experience here is compromised, then I'll just leave for another forum.
Rating: 3 Votes

Cute idea, but no protection for the phone, really. If they upgrade it with some form of edge protection, then maybe I would be interested. Looks like a beta fashion accessory more than anything else to me.


It's not really for "protection", I see plenty of people use their phone naked and don't really give a damn if it's damaged.

Not everyone is neurotic about protecting their phone... I'm not one of those people... :confused:
Rating: 3 Votes

Makosuke
Well, this is a disappointment. I want a nice wallet case for my iPhone 6, since I pretty much am never going to leave the house with one but not the other, and I'd rather just have one thing in my pocket.

After doing a survey of what my options are, I decided that the hypothetical BookBook for iPhone 6 would probably be the closest to my ideal case--at least 3 card slots, an ID window, a little thicker so some room for cash without bulging horribly, and provides a bit of edge protection in case I drop it. So I got one of those cheapie $20 cases and waited patiently to see what TwelveSouth would come up with.

Given that they sent out an email recently explicitly saying that they're working on a BookBook case for the 6, I assume that one is still in the pipeline, but I'd sure like to at least know what it's going to look like, even if it won't ship for a while, so I'll know whether I should be waiting for the damn thing or buying something else.

It's the "It's coming, but we aren't telling you what it's going to be like" that's starting to me--I understand not being able to buy it, I just want to be able to comparison shop, and surely they have an idea how many credit card slots it's going to have by this point. Other companies, at least, have pre-orders up for their competing products, even if they weren't going to ship for a couple of months, so I know now whether to write them off or not.

Touche, but you still get the point. Magnets in contact with a chassis holding flash memory.. again, think about that.

I've thought about it, and I have no idea why this would be a problem. Perhaps you don't understand how flash memory works? As in, it is not magnetic, and magnets won't affect it?

If you want some evidence, you might have a look at that whole "Smart Cover" thing Apple itself sells for the iPad. You know, the ones that use strong magnets to both attach themselves to the iPad, and to keep closed? The iPad, in fact, even includes a sensor to detect the magnet so it knows when the cover is closed.

What amuses me is that it's been 16 years since Apple started shipping computers without magnetic floppy drives, and nearly a decade since non-magnetic flash memory became standard in cameras, and people still think that magnets somehow affect all storage.
Rating: 2 Votes

Rocketdealer
Hmm, isn't the screen getting stretch over time, with the card rubbing on it?
Rating: 2 Votes

janderson0719
I've yet to find somewhere to use Apple Pay
Rating: 2 Votes