Facebook today announced the release of a new anonymous sharing app called Rooms, which will allow users to create an anonymous invite-only chat room based around any theme.

Rooms is a standalone app that is not integrated with Facebook and does not require a Facebook login. No personally identifiable information is required within chat rooms and users are identified by nicknames. A user can join a chat room via a QR code that can be shared online, offline, privately, or publicly. While Rooms does not monitor user location, it does store messages on Facebook's servers. 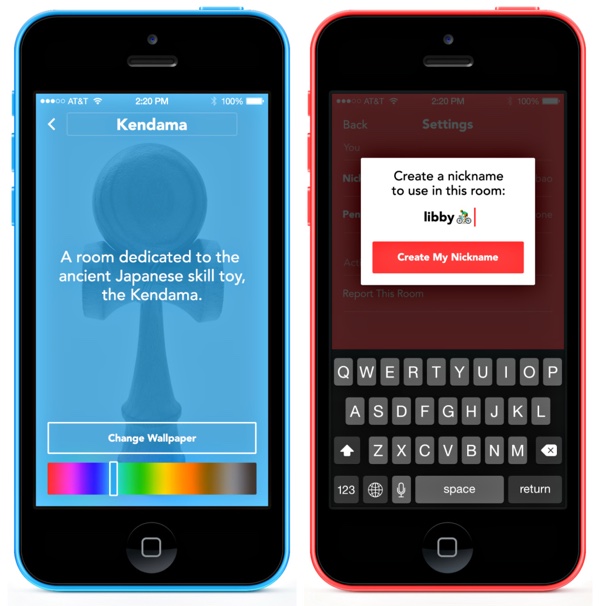 Rooms will be using the same community standards used by Facebook, so content flagged for bullying, threats, spam, and more can be deleted by Facebook. The site can also ban members or disable entire chat rooms, and each Room moderator has the power to ban users who join.

Chat rooms, which can be created on any topic, are also customizable with different colors, emojis, and more. According to Facebook Product Manager Josh Miller, who spoke to Re/code, Rooms is not designed to emulate anonymous sharing apps like Secret or Whisper, instead aiming to provide people with a place to chat with others who "care about the same stuff you do."

Rooms lets you create places for the things you're passionate about. Pick a topic, customize the look and feel, be whoever you want to be and share with others. It's perfect for the things you love and interests that make you unique.

- Pick a topic: Create a home for people who are as into the topic as you are.
- Customize the look and feel: Pick a color, choose an emoji for your like button, and more!
- Be whoever you want to be: Choose nicknames for yourself, real or made up.
- Share with others: Invite other people so you can share photos, videos, and notes with them.

Rooms was created by Facebook's Creative Labs branch, which has also created Paper and Slingshot. While news reader Paper has enjoyed success in the App Store, video and photo messaging app Slingshot has not been as popular.

Rooms is an iPhone-only app that can be downloaded from the App Store for free. [Direct Link]

Caliber26
I hope it's similar to the old AOL chatrooms. I actually miss those things.
Rating: 13 Votes

Great, finally an anonymous Facebook-Chat. What could possibly go wrong!


I trust facebook about as far as I can throw Zuckerberg.
Rating: 9 Votes

I trust facebook about as far as I can throw Zuckerberg.


He's fairly scrawny. I reckon I could get some distance. At least a lot more distance than I trust them.

So let me get this straight: Facebook just released a chat room app in 2014? Interesting. I feel like chat rooms have been unpopular long enough that this will seem new to the kids. Or perhaps ironic to the hipsters.
Rating: 7 Votes

Analog Kid
Still trying to get my head around "anonymous" and "invite only". Does the room mod know who the people are that are members but unable to tie a post to a person, or does this QR thing mean that membership is limited to only those people with email?
Rating: 6 Votes

BSDanalyst
Going to fail just like paper and slingshot.

Facebook is trying really hard to be relevant but seems that it's decline isn't slowing down anytime soon.
Rating: 4 Votes


Facebook.... anonymous... not integrated with Facebook... No personally identifiable information is required within chat rooms and users are identified by nicknames....it does store messages on Facebook's servers.

HA..HAHAHA..HAHAHAHA Does anyone actually buy into this BS?! It's FACEBOOK... what a crock of ****.
Rating: 3 Votes

I hope it's similar to the old AOL chatrooms. I actually miss those things.


It's not. You create a room and invite people to it. You can't search for rooms or find a listing of existing rooms. It does give a short list of a few rooms.
Rating: 3 Votes
[ Read All Comments ]