Facebook has launched a new feature called Safety Check that allows users to inform their friends and family about their safety in the event of a disaster or crisis using a check-in system. 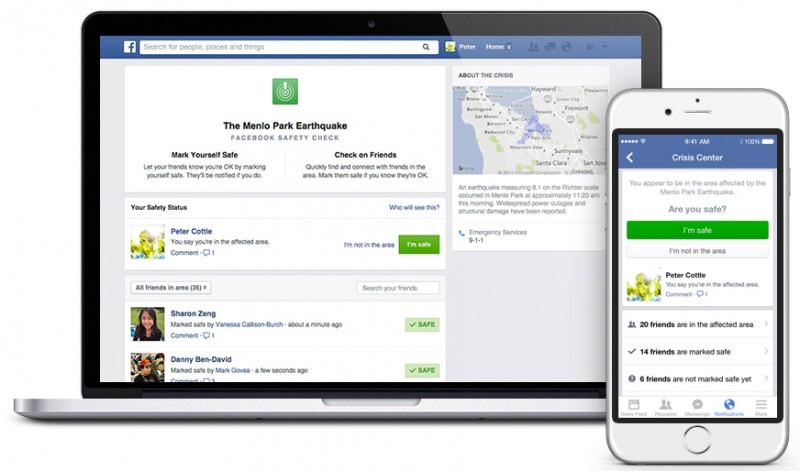 For Facebook on iOS, Safety Check automatically sends users a Facebook push notification if they are in the area of a disaster and prompts them to answer if they're safe. From there, users can select an "I'm Safe" option which will automatically generate a notification and a story in the News Feed. Friends that are marked safe will also show up in the News Feed with a list of their most recent updates.

To determine your location, Facebook looks at the city listed on your profile and recognizes the city where internet services are being used. The company will also use data from the Nearby Friends feature if a user has turned it on. Safety Check's sign-in feature is similar in nature to the Safe and Well website created by the American Red Cross which also allows individuals to register themselves as safe and inform their loved ones of their current conditions.

Facebook's new Safety Check feature comes after the company launched an update to its iOS app yesterday that added support for the iPhone 6 and the iPhone 6 Plus. Facebook for iOS is a free app and can be downloaded from the App Store. [Direct Link]

xdhd350
My son and his girlfriend and 2 kids were at ground zero last April in the Vilonia, AR tornado.

I am in the Dallas, TX area and was communicating with him right up until they had to take cover in their home. After I saw the radar update past the town, I texted him and waited... and waited. About 10 minutes later, I got a text that they were okay but had been hit and were trapped inside. He had posted on FB that they were about to get hit and so all of his FB friends were panicked. This new Facebook feature would have put a lot of people's minds at ease and possibly directed help to them in a more expedient manner. The main thing this new FB feature does, is push a reminder to those people who might be okay, but in the immediate aftermath, are trying to survive and not thinking about notifying everyone. Also, remaining battery life becomes crucial at a time like this and you don't want to be trying to do multiple notifications to everyone. It took nearly an hour to dig them out and he was worried about his battery dying.

The picture is what was left of his immaculate Nissan Altima.
Rating: 4 Votes

Unggoy Murderer
For those of you making snide remarks:

It will only activate when you're in an area that has been affected by some kind of natural disaster. They'll expand it to include 'other types' in the future. So no, people won't be updating their 'safety status' on a regular basis, it's something Facebook will switch on.

It's probably something you'd want if you knew someone in such an area. Stop being so narrow-minded and thoughtless.

thmsup
I mean, the idea and all is okay, ... but what if someone decides not to hit "I'm safe"... do all of his/her friends automatically assume, that he/she is not safe and start bothering?!

Gives the people in the "disaster area" even more texts and messages to answer, if friends are waiting for a "I'm safe" signal..
Rating: 3 Votes

THERES A TORNADO OVER OUR ROOF!!!! wait i have to uncheck my safety status on fb first
Rating: 3 Votes

Kebabselector
I'm sure this will not become annoying

seebee3
Great feature, but in many natural disasters, telecommunications have a tendency to be affected. What then? Now the family and friends have even more cause for worry even though the person any be fine.
Rating: 2 Votes

i always wonder how you guys can live there. id be scared to death. watching tornados on tv already gives me an unpleasent feeling.


I've never lived there. Never will. Though my region isn't much better... Mt. Rainier blows and I'm screwed.
Rating: 2 Votes

shenan1982
So next time there's water main break 50 miles away, Facebook is going to ask me if I'm safe.

Translation: this is a tool Facebook is using to check to make sure "active users" really are active users... when they sell your data it goes for more money.
Rating: 2 Votes

Great feature, but in many natural disasters, telecommunications have a tendency to be affected. What then? Now the family and friends have even more cause for worry even though the person any be fine.


This is a good point. Sandy was a perfect example of that, where no-one could get a signal to save their lives, that they were crowding around Starbucks for WiFi, while landline payphones still worked.

And when you think about it, it is a hell of a lot more comforting to hear the voice of a loved one telling you they are safe than a Facebook message.

Parasprite
And if it gets worse?
Rating: 1 Votes
[ Read All Comments ]