Facebook for iOS was today updated to version 16, adding support for the larger-screened iPhone 6 and 6 Plus devices. The app's new look introduces a smaller top bar, a slimmer bottom bar, and text that's sized appropriately. With its iPhone 6 redesign, the Facebook app looks much nicer on Apple's big-screen devices.

It is unclear what other changes the update brings, as Facebook's release notes are the same notes the company has shared for the last several weeks, noting that it plans to bring App Store updates on a monthly basis. 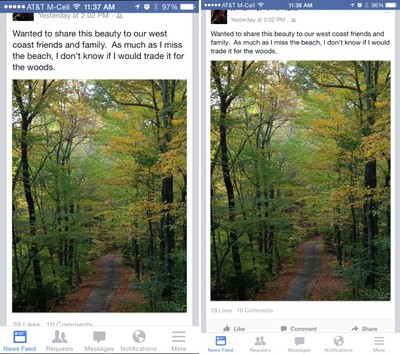 Before iPhone 6 update on the left, after iPhone 6 update on the right
Along with Facebook, YouTube for iOS has also been updated with support for the iPhone 6 and 6 Plus, again introducing a new look that does away with the zooming that apps automatically employ to fit the larger-screened phones. YouTube's update also brings several different bug fixes to the app.

Facebook can be downloaded from the App Store for free. [Direct Link]

YouTube can be downloaded from the App Store for free. [Direct Link]

milo
One of my most hated apps, although I usually use it on Android.

Release notes are a contentious topic. While some people would very much like us to describe every one of the thousands of changes that go into our mobile applications each and every release, the plain fact is that is just impossible.

Many changes are under the hood for performance and bug fixes. Many changes are trivial (moved button X over Y pixels). I know you're probably not looking for that level of detail (some are though). You're probably most concerned with "what are the new features in the app that I may want to check out?". That is equally hard to spell out into release notes.

Why is that? For one thing, features typically don't release broadly to everyone at once. There's no point in putting in a release note for a feature that you can't yet use. We do this for scaling and quality reasons, it's a fundamental part of Facebook. If small scale tests of something new go smoothly, we release a feature more widely in a controlled way. Releasing new things to the many hundreds of millions of people that use our mobile apps is a methodic process.

Beyond that, there are logistical hurdles too. Release notes need to be approved and translated into *dozens* of languages. But before you can even get to that step, you need to write what the actual release notes are. This takes a lot of time away from a release manager that should be more concerned with what bugs are blocking the release than with collecting bullet points for notes that a vast majority of people don't care about anyway. And with dozens of new features (some large, but mostly small) each release and a limited number of characters to express what has changed, which features should make the cut? How should they be described in a flat text space? Do you really want a simple text description to be your first impression of a feature?

Ultimately, we can express new features far better with walkthroughs also known as NUXs. These dialogs can allow you to control whether you want to enable a new feature, explain what value the feature aims to give you, show you how to use it. None of these things can be accomplished by putting a blurb in the App Store release notes.

Also think about this, do you look for release notes when you go to a website? How do you know what's changed there? Are you bothered by that? Many major websites do frequent pushes of a large number of changes. Facebook pushes dozens to hundreds of changes to the main website twice a day, every weekday. Releasing a version of an application on a mobile platform should be the same non-event that it is on the web and ever slowly, inch by inch, we are making progress to that goal.

Release notes are useful for small applications with a few changes each release but are useless for large, complex applications with hundreds of developers. We're not trying to keep secrets from you. There are just simply better ways of telling you what's interesting when those features are ready for you.
Score: 9 Votes (Like | Disagree)

darkslide29
"It is unclear what other changes the update brings, as Facebook's release notes are the same notes the company has shared for the last several weeks, noting that it plans to bring App Store updates on a monthly basis."

I always thought that was so sneaky. A somewhat clever yet unnerving way to put in whatever they want, delaying any backlash toward "new features".
Score: 9 Votes (Like | Disagree)

ArtOfWarfare
What is the point of the "Messages" tab in the app? Apple should reject this app for its non-functional Messages tab along with the Facebook Message App for being redundant. If Facebook doesn't give a darn when its customers dislike pointlessly stupid changes, maybe they'll listen when Apple smacks them with app rejections.

Not sure whether Facebook or Apple would stand to lose more if this happened and neither budged...
Score: 6 Votes (Like | Disagree)

Really? "appropriately" for whom?? Not my older eyes. The prior size was perfect (iphone 6 Plus), and now there's no way to increase the text to an actual readable size. VERY annoying, Facebook. :mad:
Score: 5 Votes (Like | Disagree)

Friday July 10, 2020 11:12 am PDT by Juli Clover
Apple this month published a support document that warns customers against closing their Mac notebooks with a cover over the camera as it can lead to display damage. Image via Reddit Apple says that the clearance between the display and the keyboard is designed to very tight tolerances, which can be problematic. Covering the camera can also cause issues with automatic brightness and True Tone....
Read Full Article • 243 comments

Thursday July 9, 2020 10:14 am PDT by Juli Clover
Apple today seeded the first public betas of upcoming iOS and iPadOS 14 updates to its public beta testing group, two weeks after first providing the updates to developers after the WWDC keynote and a day after seeding the second developer betas. Public beta testers who have signed up for Apple's beta testing program can download the iOS/‌iPadOS‌ 14 updates over the air after installing ...
Read Full Article • 196 comments

Friday July 10, 2020 1:59 am PDT by Tim Hardwick
Later this year, Apple is expected to release four OLED iPhones in three display sizes, including 5.4, 6.7, and two 6.1-inch models. Rumors suggest the 6.7-inch iPhone and one 6.1-inch model will be higher-end devices, and now leaker @L0vetodream has corroborated previous rumors about the internal specs of Apple's upcoming lineup. Rumors suggest Apple will use 5-nanometer A14 chips in its...
Read Full Article • 62 comments

Friday July 10, 2020 2:58 am PDT by Tim Hardwick
At last month's WWDC, Apple officially announced that its Mac computers will be transitioned from Intel x86 to homegrown Apple Silicon chips. Apple said it plans to deliver the first Apple Silicon Mac by the end of the year and complete the transition in about two years. According to Apple analyst Ming-Chi Kuo, a 13.3-inch MacBook Pro with a form factor similar to the current 13.3-inch...
Read Full Article • 157 comments