Ahead of tomorrow's media event that will likely see Apple previewing OS X Yosemite one last time ahead of the software's public release, apps that contain support for Yosemite-only features have begun hitting the Mac App Store.

PCalc, a popular calculator app for Mac, for example, has been updated with full support for OS X Yosemite, offering a Notification Center Widget and Handoff capabilities. 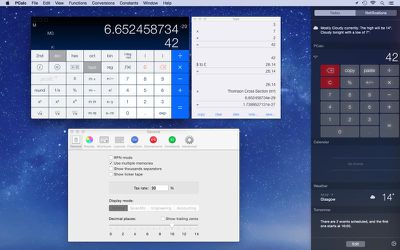 The arrival of Mac apps with Yosemite support suggests that the new operating system will be debuting shortly after the upcoming media event, possibly arriving as soon as tomorrow. Apple has seeded three separate Yosemite GM candidates, suggesting the software is nearing completion.

OS X Yosemite introduces a system-wide redesign that brings a flatter, more modern look to OS X, with a heavy emphasis on translucency. The update includes a redesigned dock, a new look for windows, and a new "Dark Mode" option.

Along with a redesign, Yosemite also offers a range of new features, such as improved integration with iOS 8 through Continuity, a new "Today" view in the Notification Center that offers integration with third-party apps, a retooled Spotlight search with new data sources, and several new features for key apps like Mail, Safari, and Messages.

Like OS X Mavericks, OS X Yosemite will be available to all Mac users as a free download.

FieldingMellish
A calculator with handoff capability?

Alphabetize
I still have a wi-fi bug!
Score: 14 Votes (Like | Disagree)

McFreggle
If only Microsoft could surprise us with its Yosemite-optimized new version of Office.

ThunderSkunk
This is the first release of OS X & related software I'm not interested in installing.

The mess they've made of iOS was bad enough. I can't have an office full of workstations that look like android phones for hyperactive 9 year olds.


This may be where we get off the train.
Score: 8 Votes (Like | Disagree)
Read All Comments