Apple has started rolling out a new iTunes Store design for OS X Yosemite testers that have iTunes 12 installed. The revamped storefront takes several design elements from the iTunes Store and App Store on iOS, adopting a cleaner, flatter look that does away with a lot of shadowing and texture that was previously seen in the design. The revamped look fits in with the design of iTunes 12, which takes on the flatter, more iOS-like look seen across OS X Yosemite.

For example, the top bar of the iTunes Store that currently displays cards in a rotating carousel for featured music, movies, apps, and TV shows in their respective categories has been flattened out into a scrollable banner with the new iTunes Store design, doing away with the previous card-style layout. 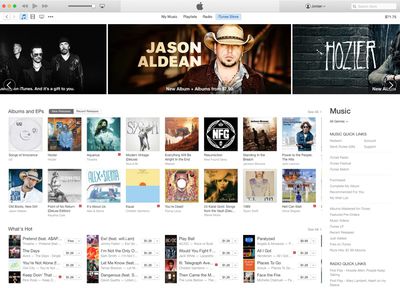 The slight bit of shadowing that used to highlight app icons, music icons, and categories, has been eliminated and as can be seen in the screenshot below, Apple is using a slightly lighter and larger font for menu options. The light gray background of the existing store has now been replaced with a white background.

Prominent rounded menu buttons have been eliminated in favor of flat, unobtrusive buttons as can be seen with the “Download” option in the individual App Store view shown below. Individual content pages have also lost all highlight shadowing, with screenshots and app icons flat against the background of the page. Movie, TV Show, and Music pages all have the same flattened design.

While main content pages now have a white background, some individual movie, app, TV show, and music pages continue to have a colored background, that also adopts all of the flat interface elements.

As noted by 9to5Mac, the new design has not yet been implemented on all pages, with some, like the gift card redemption page, continuing to use older interface elements.

iTunes 12 will launch alongside OS X Yosemite, which is expected to be released to the public in late October. The operating system may be shown off one last time at Apple’s October 16 iPad event ahead of its official launch.

I can't wait to see what they mess up this time. They're very quickly gaining a reputation for that.


Almost as quickly as MacRumors is becoming a haven for incessant whiners.
Score: 100 Votes (Like | Disagree)

shotts56
I can't wait to see what they mess up this time. They're very quickly gaining a reputation for that.
Score: 40 Votes (Like | Disagree)

Mabus51
I really hate the flat borderless bright colors the entire Tech industry has moved to. It looks awful, it's confusing, all sense of depth is removed. It also removes any sense of important information. I can't wait for this fad to die out.
Score: 32 Votes (Like | Disagree)

If you do not like what others think about the direction Apple is going you can alway disconnect your internet and stop whining about whiners.

Your post is an example of what I'm talking about. Why suggest something so extreme as disconnecting my internet? For that matter, somebody already tried hacking into my MacRumors account today, so maybe you're not the only one suggesting that I simply shut up.

What I don't understand is why so many people exaggerate every single negative facet of Apple and their products. Yes, I experience issues with Apple products just like the people I call whiners. I am not suggesting that Apple is perfect. But when I experience an issue, I either figure out a solution on my own, or ask the users here for help, making sure I remember to thank the users who give me advice- I don't always do a great job at that, but I try. What I don't do is turn my thread into an emotionally charged rant over how my single issue shows that Apple is going downhill, or flame those who haven't experienced my issue.

At the end of the day, I know that my money is mine to spend on whatever I want- if Apple products no longer meet my needs, I know that I have other options. I won't need to try to exaggerate the issues I have or convince people to side with me against Apple. I'll just buy something from another manufacturer like HTC or Motorola.

I think the ones that are most tied at the hip to Apple are the ones that can't seem to let go when it's obviously time.
Score: 20 Votes (Like | Disagree)

icerabbit
Another step in the wrong direction when it comes to usability.

It is like how they keep making the finder harder to use by taking color away in the sidebar and icons, lowering the contrast on folder icons while making them way too saturated ...

I can't wait for the flat and minimal fad to be over, where we go back to something more than just outlined shape icons, grey text on white backgrounds, icons with a bit more size to them, ...

Doesn't have to be a rainbow, but I find Apple's OS and software from a couple years ago more comfortable on the eye and easier to use. Stripping the color out, hiding options and features, and shrinking everything is just less practical. Period.
Score: 19 Votes (Like | Disagree)

Almost as quickly as MacRumors is becoming a haven for incessant whiners.

If you do not like what others think about the direction Apple is going you can alway disconnect your internet and stop whining about whiners.
Score: 17 Votes (Like | Disagree)
Read All Comments