iPhone and iPad Remain Popular With Teens, Interest in Apple Watch Tepid Ahead of Unveiling

Apple's iPhone continues to grow in popularity with U.S. teenagers, according to Piper Jaffray analyst Gene Munster's latest semiannual teen survey, which asked approximately 7,200 teens with an average age of 16 years about their device usage habits and future buying plans.

67 percent of surveyed teens owned an iPhone, compared to 61 percent in the Spring survey, and 73 percent of teens expect their next phone to be an iPhone. Much of Apple's gains in ownership came from Android, which lost five percentage points over the last several months. iPhone usage among teens may jump significantly in the next few months, as the survey was conducted just before the introduction of the larger-screened iPhone 6 and 6 Plus. 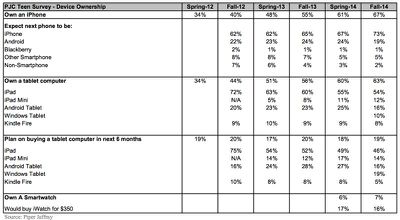 While iPad ownership remained high at 66 percent, there was no growth compared to the Spring survey. Android tablets also saw ownership numbers drop, and of customers planning to buy a tablet in the next six months, 60 percent plan to choose an iPad Air or iPad mini.

As for the upcoming Apple Watch, interest among teenagers remains relatively low. Only 16 percent of teens said they would be interested in purchasing an Apple Watch for $350, down slightly from the Spring survey where 17 percent expressed interest. Munster's survey was, however, conducted before the Apple Watch was announced, so interest numbers may shift in the next Spring survey.

Younger customers have always been important to Apple as it gives the company a chance to create lifelong customers. Apple's recent acquisition of Beats Electronics, for example, may have partially taken place as an effort to remain relevant among teenage users. In a survey of 10,000 students, a quarter believed the deal would make Apple more "cool," while 50 percent believed the acquisition would increase Apple's popularity among students.

bpeeps
While everyone wants a phone with faster internals and longer battery, the same can't be said for the iPad. While faster, thinner, longer everything is great, it's time to overhaul the iPad and offer us something new software/productivity wise.
Score: 17 Votes (Like | Disagree)

jlake02
My kids aren't quite in their teens yet and already all of their friends want iPhones. It's the phone to have.. even at younger ages.

That, my friend, is what we call a decrease.
Score: 11 Votes (Like | Disagree)

winston1236
Nobody wants that ugly watch. Sorry, but its hideous.

Anyway it will be interesting to see what happens in the next few years in terms of sales now that Google is basically forcing phone makers to produce much higher quality builds.
Score: 8 Votes (Like | Disagree)

That 16% jump from nothing in the Microsoft category for "planning on buying a new tablet". Can't ignore that.

Also own a tablet computer, Windows 10%, cant ignore that either. I've got both iPad Air and original Surface, the Surface is now running faster than my iPad due to IOS 8.
Score: 8 Votes (Like | Disagree)
Read All Comments