A recent Apple patent application (via AppleInsider) reveals some of the company's efforts looking into ways of improving the Apple TV and iTunes desktop experience using iOS. The newly published patent application, titled "Browsing remote content using a native user interface," describes a mobile application that would serve as a second screen for a connected media device. 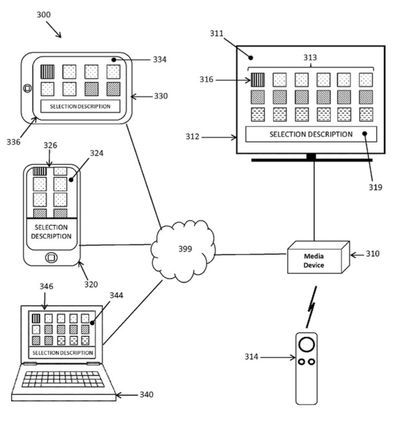 Mobile devices and computers displaying native interfaces for viewing content and sending controls to media device
This smarter iOS-based remote detailed in the patent moves away from the current Remote app that mimics a hardware remote by providing a robust Apple TV or iTunes interface on the mobile device. Users could then browse, search or perform other advanced functions right from the mobile device.

Other descriptions in the patent application, which was filed in March 2013, suggest iOS owners could use the remote to search the web for information, such as the cast of the movie they are watching, and display that information on the big screen.

Apple is rumored to be working on a new Apple TV that could launch sometime in 2015. The company reportedly is working with cable companies to negotiate access to live and on-demand content, but has run into numerous obstacles on the content front.

The new Apple TV may include an App Store, Siri integration and more. It is not yet clear whether the device will be a cable-supported set-top box, an updated version of the current Apple TV, or a combination set-top box and streaming media device, as Apple has been rumored to be working on a variety of different options.

As with many Apple patent applications showing unreleased inventions, there are no assurances the disclosed inventions will ever be released, but they can sometimes reveal hints about the company's areas of interest and research.

2457282
The current remote app could certainly use a little sprucing up. And providing a remote app on the Mac would be nice too.

HOWEVER, for the sake of all that is good in this world, PLEASE kill the cable dependency for content.
Score: 7 Votes (Like | Disagree)


You go draw a thin laptop then
Score: 7 Votes (Like | Disagree)

I hate having to scroll through using the remote to enter in Apple ID, or passwords, or general keyboard normal activities when I've got an iPad or iPhone readily available.


The keyboard has been a feature of the remote app since the apps beginning.
Score: 6 Votes (Like | Disagree)

hardax
In my opinion one of the biggest flaws in the AppleTV and most every other streamer where they want you to use your phone as an input device is the lack of HDMI-CEC input switching like the Chromecast is able to do. I HATE having something that I want to Airplay for example only to have to stop what I am doing on my phone and reach for the TV remote to switch inputs to the AppleTV. Completely ruins the flow. With the Chromecast I just tell it to play and the TV switches.

I can't understand why this isn't a bigger deal with people? It can't just be me can it?
Score: 6 Votes (Like | Disagree)

840quadra
I would LOVE for them to officially bring back Front Row.
Score: 4 Votes (Like | Disagree)
Read All Comments