Wednesday October 1, 2014 7:34 pm PDT by Juli Clover
Apple has released a new Activation Lock Status tool (via iDownloadBlog) that will make it easier for people buying a used iPhone, iPad, or iPod touch to avoid getting a device that is locked to another user.

Accessible via iCloud.com, the Activation Lock Status Checker allows users to enter a Device IMEI or Serial number to check whether a device has Activation Lock turned on. 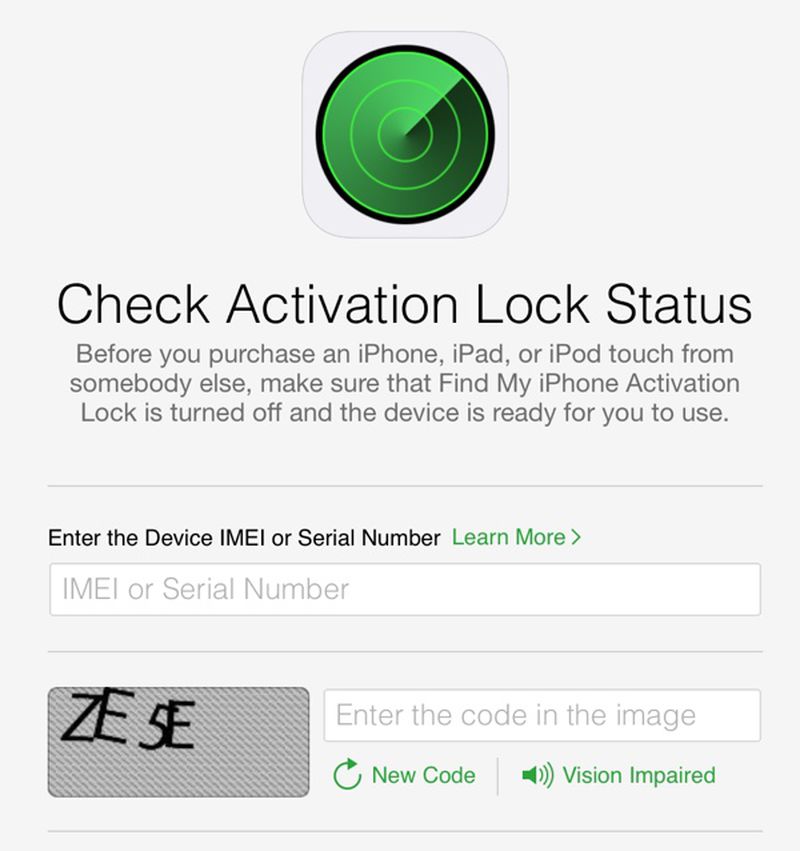 Activation Lock was introduced alongside iOS 7 and is designed to prevent iPhones and iPads from being stolen. When Find My iPhone is enabled, it effectively locks an iOS device to a user's Apple ID account, and even when wiped, the device will require the original Apple ID and password.

Activation Lock has cut down on iPhone-related thefts in major cities, but it has also affected users who purchase an iOS device used. If Activation Lock is enabled, a used iOS device will be entirely useless until unlocked by the original owner.

If an iOS device does have Activation Lock enabled, Apple's tool will give users a clear warning that an Apple ID and password will be required before another user can activate the device. It also provides instructions on how to remove Activation Lock from a used device, which requires contacting the previous owner. 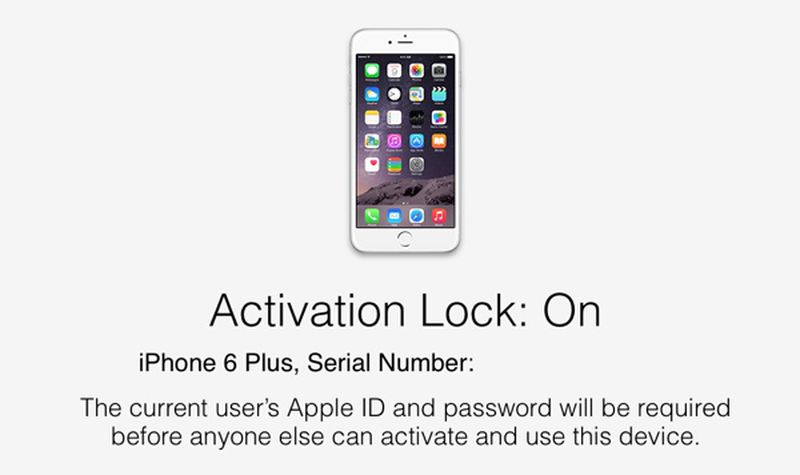 Anyone who is purchasing or selling a used iOS device should find Apple's new tool very useful, as it can be used before a transaction takes place to ensure the iOS device will be usable by the new owner.

KyleC
Awesome, how about a carrier unlock checker?
Rating: 37 Votes

batting1000
How about they create a tool that checks for bugs in their software? Seems like they could use that.
Rating: 22 Votes

Regardless of this I'd always ask for the serial number AND IMEI before buying the device.

And get it on paper/written in digital, protocoled form. (e.g. through eBay Messages)


As someone who has sold a lot of iPhones over the years, I never, ever give this information to buyers ahead of time.

It doesn't really do them any good - if I actually had a stolen device I definitely wouldn't send them the IMEI for the actual device I'm selling. However, there are various bad things the person requesting it could do with it: they could hack a stolen phone to spoof my valid IMEI, or they could sell their own stolen phone and give my valid IMEI to anyone who requests this information.

Not worth the risk. If you're buying on Craigslist, just make sure you've held the phone in your hand and verified it's not locked. If you're buying on eBay, it's pretty trivial to get a refund from eBay if someone sells you a locked phone. eBay is very buyer-centric in any disputes.
Rating: 9 Votes

ITGuy
I can definitely see users wanting to check the activation lock status of a potential iPhone or iPad purchase from an iPhone or iPad when they meet up in person to conduct the purchase transaction.

As such, this website tool must be accessible from Mobile Safari on iOS since the serial number or IMEI number may not be available until you actually meet up with the seller.

It will probably take yet another year for Apple to figure this out.

PowerBook-G5
Seems like a major score for Apple in the wake of all the -gates of the past few weeks. This will definitely help many people, the buyers to not get screwed over by buying a stolen phone and the sellers (to get screwed over for trying to sell stolen phones)
Rating: 8 Votes

AverageBob
Doesn't work on mobile devices. How useless is that?
Rating: 7 Votes

MisakixMikasa
It would be nice that if Apple allows us access this site using iOS Safari. Tried on iPhone, but would not work on iOS Safari
Rating: 7 Votes

Medic311
besides the activation lock status, it should also include the status if the serial number is already attached to an advanced RMA. remember that guy in the Macbook thread who said he bought it from craiglist and took it into the Apple store. it was sent off for repair and Apple said this serial number was from an advanced RMA and now that the laptop is returned and processed they will not be sending it back. the seller had received a replacement macbook and instead of sending the broken one back he flipped it on craigslist in hopes the buyer would take it into apple and send it off to be repaired.

apparently it's a scam that gets repeated over and over again so perhaps they should include "RMA status" in that as well
Rating: 5 Votes

How about they create a tool that checks for bugs in their software? Seems like they could use that.


It's called a debugger.
Rating: 5 Votes