iOS 8, released to the public earlier today, included a slew of new APIs for developers. One of those APIs opened up Touch ID to third-party apps, letting developers use the fingerprint scanner for authentication purposes within apps.

Quite a few apps have been updated to take advantage of Touch ID integration, replacing passwords and PIN codes. We've gathered up a comprehensive list of the most popular apps that now use Touch ID, which you can find below. 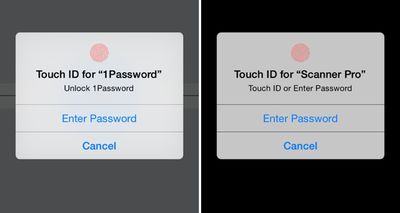 - Evernote (Free) [Direct Link] - Evernote allows Evernote premium users who have protected their accounts with a passcode to log in with Touch ID instead of a number.

- Day One ($4.99) [Direct Link] - Day One allows users to unlock their journals with Touch ID, replacing a passcode.

- ETrade* (Free) [Direct Link] - ETrade has been updated with Touch ID authentication, which allows users to enter the app through fingerprint verification rather than a password.

These are just a sampling of the apps that have integrated Touch ID so far. Additional app developers will likely be rolling the feature into their apps in the near future, now that iOS 8 is widely available. Want more iOS 8 info? Make sure to check out our iOS 8 roundup, our iOS 8 Hidden Features roundup, our list of apps with widgets in Notification Center, and our list of third-party keyboards.


Complain when it's not here; complain when it arrives. Some people just don't want to be happy.
Score: 16 Votes (Like | Disagree)

On the bottom of safari press the square icon with arrow and slide bottom icons over until you see 1password. Select and it will be obvious from there.


You sir have saved my phone from gravity. Thank you!
Score: 5 Votes (Like | Disagree)

kuwxman
I'm sure USAA won't be too far behind. They are always at the forefront of adding in these types of things to their banking app. :cool:
Score: 4 Votes (Like | Disagree)

marf1million
Is it just me or does 1password only ask for touchID some of the time?
Score: 4 Votes (Like | Disagree)

jclo
If you know of an app I've left out of this list, feel free to email me and I'll update it. juli@macrumors.com
Score: 4 Votes (Like | Disagree)