Along with iOS 8, Apple has also released the new Apple TV software update that's been in development for the last few months. The updated software includes new icons, which are designed to resemble the icons in iOS 7, taking on a flatter, less glossy look.

Several icons, like Music, Computers, and TV shows have new colors, and the on-screen fonts have been updated as well. The update includes support for several features that have been built into iOS 8 and OS X Yosemite, like Family Sharing and iCloud Photo Support. 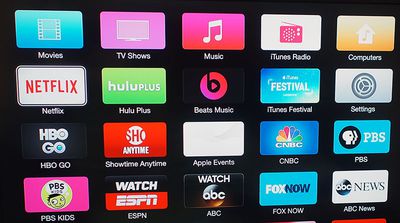 With Family Sharing, families of up to six people with iTunes accounts that use the same credit card can share content like apps, iBooks, music, movies, and more, across all of their devices using iCloud. Family Sharing also lets families share photos, videos, a calendar, reminders, and more, to keep everyone in the family connected.

In addition to introducing a new look and new features, today's update brings a Beats Music channel to the Apple TV for the first time, allowing users to log into their Beats accounts to listen to streaming music from the Apple TV.

The new software can be downloaded for free on the Apple TV by going to the Settings channel and selecting General --> Software Update. The update is limited to users who have third-generation Apple TV boxes.

Traverse
Another icon for me to hide.
Score: 13 Votes (Like | Disagree)

luckydcxx
Beats is hands down the best app for music! this is a great addition to ATV!
Score: 11 Votes (Like | Disagree)

576316
There is an update for the Apple TV 2 but it doesn't apply any of the visual changes. Sad. There's no reason to alienate the Apple TV 2. This is hardly a big update.
Score: 8 Votes (Like | Disagree)

ArtOfWarfare
This is getting really redundant now...

I know the difference between them, but it seems to me that a non-tech savvy person would have difficulty knowing the difference.
Score: 7 Votes (Like | Disagree)

William Gates
It would be nice to add continuity to the Apple TV where you could easily pick up a movie/tv show you were watching on your Apple TV on your iPhone or iPad. Say if you had to go to the kitchen for something and didn't want to miss or pause the video.
Score: 7 Votes (Like | Disagree)

I just purchased the Apple TV 3 with the $25 gift card promotion.
Will be selling my ATV 2 :)


Don't forget that the ATV2 can be jailbroken and there is a HUGE market for them on eBay for that reason, selling for at least a couple of hundred dollars.

Just in case you were going to get low balled by a company or friend.
Score: 6 Votes (Like | Disagree)
Read All Comments