It is possible given the release timing that both versions of Yosemite, DP 8 and the new public beta, are the same. The public beta will also include updates from Developer Preview 7, which included a new look for Dark Mode, several tweaked icons, and the removal of the "Software Update" option from the main Apple menu.

Apple is expected to release OS X Yosemite to the general public later this year, possibly following an October event that may introduce new iPads.

are the software engineers that bad that they gotta have this many dp preview?


I know, right? And coding an OS update is SUCH a simple task, after all. Ridiculous really.
Score: 20 Votes (Like | Disagree)

Planning to stay on Mavericks for a long time even when Yosemite is released.
I don't like the 2D dock on Yosemite or the other UI changes (which you can't change AFAIK).


The 2D dock is one of my favorite things...I HATE the 3D dock and was upset when they removed the ability to enable "no glass" from the terminal to get a 2D dock (under Mavericks).
Score: 14 Votes (Like | Disagree)

Troy2000
I had hoped that the Finder navigation buttons would be fixed in DP8 but unfortunately they have not been. :( 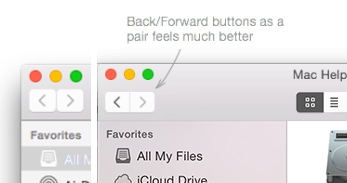 Linux vs OSX? Lets be real. Do you want a OS for work or play? Nothing will ever replace my primary Linux machine for work.

Let's actually be honest. The only thing Linux beats OS X in work related aspects is for Electrical/Computer engineering, open source obsessed computer scientists/programmers, sysadmins, and the occasional customization crazed neckbeard who had too much time to learn exclusively not to use a GUI. Otherwise, OS X and Windows are better for real work. :P
Score: 8 Votes (Like | Disagree)
Read All Comments

Saturday April 17, 2021 4:43 am PDT by Sami Fathi
Reliable leaker known as l0vetodream has hinted that Apple may debut its rumored redesigned and colorful iMac at its "Spring Loaded" event on Tuesday, April 20. In a tweet, the leaker posted an image of Apple's logo used for marketing the upcoming event and an image of the retro rainbow Apple logo alongside the colorful lineup of G3 iMacs. Apple leaker Jon Prosser previously reported that...
Read Full Article • 262 comments

Monday April 19, 2021 11:30 am PDT by Juli Clover
The upcoming 12.9-inch iPad Pro will be thicker than the previous-generation version, likely due to the inclusion of the mini-LED display. We've heard several rumors about the change in thickness, and now leaked design images have confirmed it. A source that designs accessories for Apple devices sent MacRumors a series of photos that feature exact dimensions for the new iPad Pro models, and...
Read Full Article • 159 comments

Monday April 19, 2021 7:51 am PDT by Sami Fathi
Following the removal of the app in January, Apple will now allow the social media app Parler to return to the App Store following changes to how the social media network moderates content, CNN reports. On April 14, in a letter to Sen. Mike Lee and Rep. Ken Buck obtained by CNN, Apple said that the app has improved the way it moderates content, and says those changes are "sufficient" for it...
Read Full Article • 214 comments