Tim Cook: Steve Jobs' DNA Will Always Be the Foundation of Apple

In a clip of the interview shared by ABC News, Muir asks Cook if he was thinking about Steve Jobs' during today's event, which took place at the Flint Center at De Anza College, the same location where Jobs unveiled the original Mac in 1984. Cook responded that he thinks of Jobs all the time, and that he believes Jobs would be "incredibly proud" to see the company today. 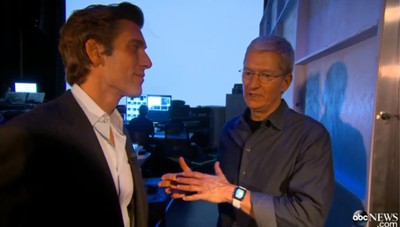 I think about Steve a lot. I love Steve dearly. There's not a day that goes by that I don't think of him. This morning, being here, I especially thought about him and I think he would be incredibly proud to see the company that he left us -- which I think was one of his greatest gifts to mankind, the company itself -- be doing what it's doing today. I think he's smiling right now.

Jobs apparently was not aware that an Apple Watch was coming, as Apple began work on the device after his passing. According to Cook, though, the "foundation" that Jobs left can be seen in all of the work that Apple is doing today.

His thinking and his taste and his incredible perfectionist kind of view, and his view that you should always innovate, all of those things are alive and well in the company. And I think they always will be. I think his DNA will always be the foundation of Apple.

diddl14
Is this still an apple fan site? Just asking because there is so much bitching going on here today in the comments...
Score: 27 Votes (Like | Disagree)

Señor
I was really happy to hear they brought back Steve's "one more thing". I truly thought Apple did wonderful with this event and wish them luck in future events.
Score: 27 Votes (Like | Disagree)

keysofanxiety
Regrettably I don't think the Apple Watch is something Steve would have liked in any way whatsoever. It seems self-indulgent and has a user interface comparable to that of a classroom projector.

I'm not hating -- I really thought Apple would pull something out of the bag, especially with all the hype. This is essentially a glorified Samsung Gear. It was at the moment when I saw the crowd go wild over something I just couldn't see as groundbreaking, that I felt a sinking 'I might be in a cult' moment. Had Samsung introduced the exact same product, we'd be laughing rather than considering jumping ship.

k995
Sorry not seeing it, more a cheap way to get some reference to Jobs.
Score: 15 Votes (Like | Disagree)

Is this still an apple fan site? Just asking because there is so much bitching going on here today in the comments...


Correct. Oddly enough, it's because it's an Apple fan site that people get bitchy like this. It's because of the respect of the company that people get emotionally invested in Apple, and have some bad things to say when odd products are announced or mistakes happen.

'Apple fan site' should in no way connote 'praise everything Apple ever release'.
Score: 14 Votes (Like | Disagree)

lol
omg i knew it. the media whoring of this company is unbearable.
even when they release a inferior product.
Score: 14 Votes (Like | Disagree)
Read All Comments

Friday July 30, 2021 9:04 am PDT by Sami Fathi
Tesla CEO Elon Musk reportedly once demanded that he be made Apple CEO in a brief discussion of a potential acquisition with Apple's current CEO, Tim Cook. The claim comes in a new book titled "Power Play: Tesla, Elon Musk and the Bet of the Century," as reviewed by The Los Angeles Times. According to the book, during a 2016 phone call between Musk and Cook that touched on the possibility of ...
Read Full Article • 241 comments