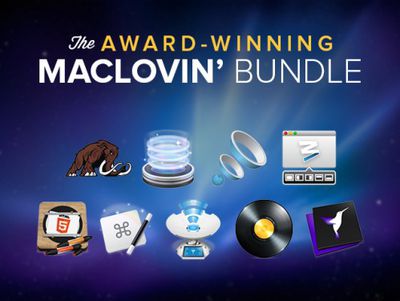 StackSocial is currently offering a bundle of 8 Mac apps, featuring several that have won awards from Apple and Macworld. All buyers receive the following apps for just $39.99, a significant discount compared to the total retail value of $362:

Notably, djay was included in Apple's "Best of Mac App Store" list in 2011 and was updated earlier this year to include full Spotify integration. Cinemagraph Pro was selected as an Apple Design Award winner at WWDC in June.

The first 5,000 buyers of the MacLovin' bundle also receive the OS X App Masterclass, a Mac app development e-learning course that has a retail value of $499, which bumps the total retail value of the bundle to $861.

The MacLovin' bundle is available through August 19.

iSee
Boom is a nice little app if you frequently find that your laptop speakers are not loud enough.

jettredmont
Can't speak to all of these (the ones that sound good to me I already own so I won't be taking part in the bundle), but Boom is definitely very useful. I use it on my wife's 2006-era MacBook and my 2009 MacBook Pro without issues and it really really helps make those laptops audible in not-completely-silent environments. I have DropZone (I think an earlier version) and never found it more useful than the built-in tools for moving files between Macs, but it is an AirDrop-like bit of functionality which works on older pre-Bluetooth Macs so some might find it useful. I also used it to copy clipboard contents between computers, although these days I just open up a screen sharing session and copy the clipboard over when necessary. Keyboard Maestro seems to get a bit of press, but I do everything I could see myself using it for using Alfred these days. I've tried the likes of Moom a few times and just can't get into arranging windows that way. I like "disorganized" windows. Maybe this is a draw to some folks, although can't vouch for this particular incarnation's stability or usability.

The others all seem like "if you need it, there it is" type of apps. The WiFi mapping software seems like a cool bit of software, but the price on it alone makes me wonder if it will be around a few years from now.

Oh: and StackSocial, in general, seems to be a good company. They do periodic bundles amongst their "deals". As always, there are good deals and there are not-good deals; just do your research before buying. But, I've bought several items from them over the past year and have had nothing but good experiences. Just wanted to say that in case someone had not heard of them or was unsure about sending money to a company you've never heard of.
Score: 2 Votes (Like | Disagree)

lk400
The name is like one of the characters in the movie super bad
Score: 1 Votes (Like | Disagree)

japanime
I got Boom for free through an Amazon promotion a few months back. It seemed like just the sort of app I needed to boost my MBA's weak speaker, but I found that Boom simply boosted the audio so it began clipping about any audio source. Maybe I was using it wrong? In any case, I decided it wasn't worth the time.
Score: 1 Votes (Like | Disagree)
Read All Comments

Saturday May 21, 2022 9:00 am PDT by Hartley Charlton
With around four months to go before Apple is expected to unveil the iPhone 14 lineup, the overwhelming majority of rumors related to the new devices so far have focused on the iPhone 14 Pro, rather than the standard iPhone 14 – leading to questions about how different the iPhone 14 will actually be from its predecessor, the iPhone 13. The iPhone 14 Pro and iPhone 14 Pro Max are expected...
Read Full Article • 250 comments