Algoriddim, makers of the popular DJing software Djay, have solved one of the app's biggest problems with a new update out today. Thanks to a new partnership with Spotify, the subscription music service, Djay now offers direct access to Spotify's full music library of more than twenty million songs.

Previously, users could only mix and play songs that were stored locally on their iPhone or iPad, which was fine for professional DJ's using the software, but a significant limitation to users looking to play around at a backyard barbecue.

With twenty million songs at their fingertips, users may feel overwhelmed by the choices at hand -- but Djay and Spotify have a solution to that problem too. Earlier this year, Spotify acquired The Echo Nest, a "music intelligence company" that analyzes songs to recommend songs that would go well together.

As a result, Djay will analyze a currently playing track and make recommendations based on BPM, key, musical style, and how well a song mixes with the current track. There is also an Automix Radio feature that will automatically pick and play songs that go well together, beatmatching them for DJ-style transitions. 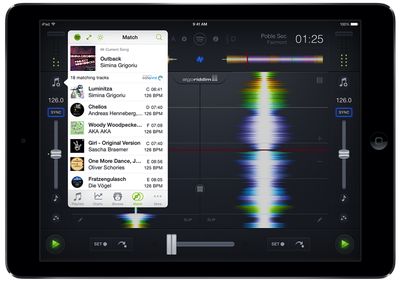 The Spotify integration, a relative rarity for standalone apps, shows what Apple could be looking for with its rumored Beats music service acquisition. A subscription music service API built-in to iOS could unleash a whole new category of apps to give the iPhone and iPad a unique differentiator from Android, especially if Apple were to bundle the service into the cost of the device itself.

“Having more than 20 million songs instantly at your fingertips is a DJ’s dream come true. It gives djay 2 users endless creative possibilities and elevates the artform of DJing to a new level,” says Karim Morsy, CEO of Algoriddim. “The power of The Echo Nest driving track selection brings a new tool to the DJ that I could not have ever imagined possible. It truly helps to discover, explore, and find great new music that sounds amazing together.”

“Not only can Spotify Premium users DJ millions of songs, but they'll also enjoy real-time, intelligent suggestions on what to play next, powered by The Echo Nest's analysis of all the music on Spotify,” says Sten Garmark, VP of Product at Spotify. “Djay 2 will help DJs and regular music enthusiasts, regardless of their skill level, select the perfect songs for their set - or simply lean back and let djay 2 turn any Spotify playlist into a slick DJ set for parties or private listening."


Djay also revealed that it has more than 10 million downloads across all its platforms, a number that connects nicely to the 10 million global subscribers that Spotify announced yesterday.

Djay owners looking to use Spotify will need to sign up for a $10/month Spotify Premium account, though Djay users will be able to take advantage of a special 7-day free trial even if they have previously used a Spotify Premium trial. Premium includes ad-free music, the ability to download tracks to listen offline, and full mobile support.

To celebrate the new partnership, Algoriddim is offering Djay 2 for iPhone as a free download and Djay 2 for iPad for half-price, $4.99, for a limited time. Both are available from the App Store. Djay for Mac does not include Spotify integration, but the company didn't rule it out as a future possibility. [Direct Link: iPhone, iPad, Mac]

Not buying anymore app from this devs again. They deleted my old Djay app from the store. How's that even legal ?


They did remove the first Djay from the app store, so people couldn't buy it any longer. However, if you already purchased it in the past, you should be able to check your purchase history, and download it that way. It's under my purchase history and I can re-download it.
Score: 8 Votes (Like | Disagree)

ericinboston
As a professional dj (who has been beatmixing since the 80s) and very technical in computers, this is quite cool and I've been wondering at what point in time this day would come.

However, the person owning/holding the iPad with this integration is NOT A DJ by any stretch of the imagination...they are simply turning on the iPad, and hitting Play and walking away for 6 hours. Literally.

In the past 10+ years with massive MP3 adoption and the past few years of iPad/DJay adoption, wanna-be DJs have been ankle biters for mobile/party gigs...but as anyone who has hired one of those "djs", they simply don't have the knowledge, the experience, and don't "get" music and/or how to really be a dj (knowing your crowd, knowing the atmosphere, selecting which mix/version of which song, beatmixing, key matchup, when and how often to use the mic, volume control and EQ, etc.).

Some veteran djs have made the transition in the past 10 years to laptops with massive MP3 collections because of huge space savings and the ability to bring the entire library on a laptop rather than crates of cds/vinyl...as well as what professional cd players can also do with MP3 files in addition to cds.

Cool app...but anyone advertising themselves as a DJ with this app is a complete liar because the app is doing 100% of the work. It would be like calling yourself a professional dish washer even though all you did was load the dishwasher (machine) and hit Run and came back an hour later. The app would probably flourish as a non-dj service...meaning something you pay for and turn it on when you have a long car ride or a BBQ but of course are not paying a "dj" to turn it on for you. :)
Score: 5 Votes (Like | Disagree)

Previously, users could only mix and play songs that were stored locally on their iPhone or iPad, which was fine for professional DJ's using the software, but a significant limitation to users looking to play around at a backyard barbecue.


Oh no. I really hope that no backyard barbecues that I go to this summer have some guy trying to mix together random songs from Spotify. My ears...my poor poor ears...
Score: 5 Votes (Like | Disagree)

As a professional dj (who has been beatmixing since the 80s) and very technical in computers, this is quite cool and I've been wondering at what point in time this day would come.

However, the person owning/holding the iPad with this integration is NOT A DJ ......


you're making a lot of assumptions about whatever person may choose to use this or any other djing app. I garauntee you would be able to tell the difference between two people using the app. 1 with experience who knows what they are doing and 1 who just picked up the app and tries to be cool.
in fact, if you can't see the gear in the dj booth, a good dj will sound good, and bad dj bad. and you wouldn't even know what they were using.
technology has made the technical aspects of djing easier, but there much more to it, as you mentioned, that comes with experience and taste.
a good dj could definitely have great gigs with simply an ipad and a controller or mixer. no need to bash it for no reason.
Score: 4 Votes (Like | Disagree)

Apple doesn't need Beats to do this. They could have just bought Djay/Spotify and saved a few billion dollars. Or done it themselves.


Actually, others (in the various beats stories) have said Apple could not do that. Whoever buys Spotify does not get the licensing. The buyer gets the brand, the user base, but must re-negotiate licenses with the labels.

When Apple approached labels to build their own Spotify-like service, they wanted to charge Apple more than Spotify is paying. Would not match.

Whoever buys Beats (aka MOG) does get the brand, user base, and licenses fully transferable. No need to re-negotiate. Apple would get the rates they wanted to begin with.
If true, then that can pay off in the long run. The headphone hardware part is still profitable but they can always sell it off later.
Score: 3 Votes (Like | Disagree)

SmokyD
Apple doesn't need Beats to do this. They could have just bought Djay/Spotify and saved a few billion dollars. Or done it themselves.
Score: 2 Votes (Like | Disagree)
Read All Comments