After nearly three and a half years with only a minor processor bump, Apple late last year launched its redesigned Mac Pro, moving to a compact cylindrical design relying on a slew of Thunderbolt 2 ports for expandability. While the new machine began shipping in the last few days of 2013, extreme shortages of the machine persisted for months and it wasn't until two months ago that shipping estimates reached the "within 24 hours" level and Apple's own retail stores began stocking the Mac Pro for immediate purchase. 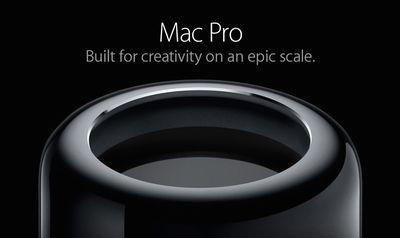 Potential Mac Pro customers may now, however, be starting to look forward to the first update for the redesigned Mac Pro, as Intel appears set to launch new processors appropriate for the Mac Pro next month. As highlighted by Macworld UK, Intel's "Grantley" Xeon E5 v3 chips are nearly ready to ship as successors to the current "Romley" Xeon E5 v2 chips used in the Mac Pro.

Intel announced last month that it had begun shipping at least some versions of the new Xeon E5 v3 chips to server makers, and widespread availability is reportedly set for September. ChipLoco outlined a significant set of E5-2600 v3 series chips, including several that recently became available for pre-order and could be used as an upgrade to the current top-of-the-line 2.7 GHz 12-core E5-2697 v2 chip found in the Mac Pro.

The direct successor to the current chip is the 2.6 GHz 14-core E5-2697 v3 chip, although the new chip does come with a higher thermal rating and it is unclear whether that change would have any impact on Apple's willingness to use the chip in the Mac Pro. Other variants in the new high-end E5-269x v3 series range from 12 to 18 cores.

As with the E5-2600 v3 series chips, these E5-1600 v3 series chips come with higher thermal ratings than their predecessors. All of the new chips in both series also support faster DDR4-2133 memory, which will also contribute to improved performance.

On the graphics side, Apple uses customized versions of AMD's FirePro series of high-end graphics cards, although Apple's D300, D500, and D700 options can be roughly equated with AMD's W7000, W8000, and W9000 on the PC side. Over the last several months, AMD has been updating its FirePro cards, culminating with this week's introduction of four new cards, including the W7100 successor to the W7000 card. Alex4D summarizes how the W9100/W8100/W7100 cards introduced in recent months compare to their predecessors and collates a handy comparison chart showing how these new and old cards compare to Apple's D-series cards.

At each level AMD have at least doubled the VRAM, added 40% more stream processors. The W8100 and W9100 have wider memory buses (so more information can be transferred for each command) and many more transistors.

Although Apple can specify any number of stream processors, clock speeds or VRAM, these more recent cards show what AMD considers is the low-, medium- and high-end when it comes to PCs. For Mac owners perspective, they show how much card for a similar amount of money AMD can now make compared with the cards in the Mac Pro and 2012.

As for when updated Mac Pro models might arrive, that remains unclear, but the good news is that the pieces supporting a potential upgrade are starting to fall into place. While Intel's new processors are reportedly scheduled to arrive next month, it is unlikely a Mac Pro upgrade is that close given Apple's usual iPhone focus for that month. But it seems possible an upgrade could be in the works by late this year or early next year depending on how Apple decides to space out its product launches and at what point it views the Mac Pro as in need of a boost.


After much thought and deliberation, I have decided to give you permission to buy the new Mac Pro.
Score: 25 Votes (Like | Disagree)

zipa
Why can't they make a desktop tower for normal people? ****, solder in the parts and weld the box shut if you have to, but don't make me buy a new friggin 27" display every time I want to get a new computer.
Score: 13 Votes (Like | Disagree)

Chupa Chupa
Hmm... maybe if they refresh the MP they'll load up the refurb store. I could go for a bare bones "previous model" MP in the low $2Ks.
Score: 12 Votes (Like | Disagree)

I appreciate they are catering for the "Pro" market but there is a BIG market in Hackintosh.


Protip: Anything that requires more than a typical consumer knowledge base to set up, by definition, does not have a market considered anywhere near "BIG" enough for a consumer driven company to invest in.
Score: 9 Votes (Like | Disagree)

You are being blatantly rude and disrespectful and should be banned from these boards for that behavior, flat out.

If you buy bargain parts on eBay, and really shop, you can put together a power Hackintosh for a quarter of the $9599 you would spend for a Mac Pro. That can be done, yes...it can.

I mean -- a Powerful Xeon Multiprocessor Hackintosh WITH Thunderbolt and Flash Storage can be easily built for under $2700. Easily.

And again, why would Apple want/need to focus on a market segment like that? :confused:
Score: 8 Votes (Like | Disagree)
Read All Comments

Saturday December 3, 2022 10:23 am PST by Joe Rossignol
iPhone 12 Pro and Pro Max, iPhone 13 Pro and Pro Max, and iPhone 14 Pro and Pro Max models feature a LiDAR Scanner next to the rear camera that can be used to measure a person's height instantly in Apple's preinstalled Measure app. To measure a person's height, simply open the Measure app, point your iPhone at the person you want to measure, and make sure they are visible on the screen from...
Read Full Article • 107 comments