With under four weeks to go until the expected introduction of the iPhone 6, increasingly complex parts are continuing to leak. Just weeks ago, photos showing two bare logic boards similar to but distinct from corresponding parts from existing iPhones surfaced, lending credence to rumors of two larger iPhone 6 models.

One of those logic boards has now been revealed in what appears to be a fully assembled state in a photo reposted by Apple.club.tw [Google Translate]. While several physical features such as the nano-SIM slot, a number of connectors for flex cable components, and a flash storage chip that appears to be from Toshiba are visible in the somewhat blurry photo, the most interesting components of the board unfortunately remain hidden under electromagnetic shielding. A silver component at the bottom of the board on the left is almost certainly the Wi-Fi module, although no identifiable markings can be seen. 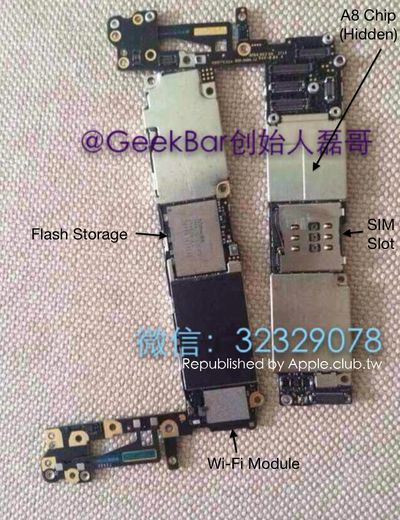 Annotated photo of iPhone 6 logic boards
A second photo [Google Translate] shared by Apple.club.tw today shows a pair of flex cables also said to be from the iPhone 6. The cables appear to be the same as seen in a detailed photo of the front panel display assembly yesterday.
[ 57 comments ]

To me - this daily reporting of minor leaks of parts is somewhat pointless.

Pick one. And with respect you're on an Apple rumour site. We haven't yet seen a fully assembled Logic Board for the iP6. I'll agree there have been a lot of leaks recently, but that goes with the territory of being a rumour site.
Score: 16 Votes (Like | Disagree)

CmdrLaForge
To me - this daily reporting of minor leaks of parts is somewhat pointless.
Score: 11 Votes (Like | Disagree)

So we know where the RAM is and who makes it, but the big question remains:

Please, Apple, make it so!

D.T.
I need to see the screws, these other components are pointless.
Score: 8 Votes (Like | Disagree)

16GB of RAM? Four times that of my iMac.


That would be great. To go from 1GB of RAM to 16GB in one year ;) Maybe Apple will give us 1TB of flash storage too :D
Score: 6 Votes (Like | Disagree)
Read All Comments