Thieves last night stole an unknown number of MacBooks in a smash-and-grab theft at the Apple Store located in the Southpoint Mall in Durham, North Carolina. The MacBook units reportedly were display models situated in the front section of the store. 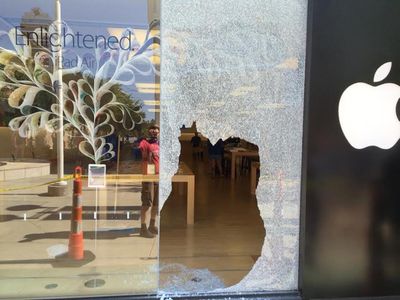 The Apple Store is part of The Streets at Southpoint, a shopping destination that includes both an indoor mall and an outdoor shopping pavilion. The Apple store is located in an outdoor section of the complex, making it an easier target for an overnight theft. The store is currently closed following the break-in.

Smash-and-grab robberies are not uncommon at Apple retail stores, which often are built with glass panels to showcase the interior of the store. In December of last year, the new Haarlem store was the target of a smash-and-grab robbery shortly after it opened. Only a small amount of merchandise was stolen in that break-in.

in b4 "they should have used sapphire glass" jokes


Posting that is just admitting you have a premise for a joke but can't flesh out the actual contents that would make it funny.
Score: 20 Votes (Like | Disagree)

BornAgainMac
The crooks created an Apple Logo out of the broken glass.
Score: 6 Votes (Like | Disagree)

Apple chooses to ignore the concept "Crime Prevention by Design" during store construction. If a business designs its store layout in such a way as to make it easy for B&E artist to steal, then the company can't complain if victimized. Glass is pretty but does little to stop a determine criminal. :p

A lot of people here seem to be under several delusions when it comes to glass storefronts.

First, this is not a problem even closely exclusive to Apple stores. Most Apple stores are in malls. Show me a store in a mall, indoor or outdoor, that DOESN'T have at least a partial wall of glass or gigantic windows in the front. There's a reason it's called window shopping, folks. The percentage of glass makes no difference to the "ease" of breaking in. Is your house more likely to be broken into if it has 20 windows instead of 10? No. If it has one, it can be broken in the same way.

Second, breaking glass is not always as easy as you think it might be. Glass, just like any other material has strengths and weaknesses, and like any other material requires the right tools and technique to break it. Also, the kind of glass used plays a huge part. Some glass is damn near unbreakable (http://youtu.be/x_CiLZY-HGw?t=3m13s).
Score: 5 Votes (Like | Disagree)

pdaholic
Unfortunately, the "geniuses" forgot to install the Find My iPhone app.
Score: 5 Votes (Like | Disagree)

Sunday Ironfoot
in b4 "they should have used sapphire glass" jokes
Score: 4 Votes (Like | Disagree)

CaryMacGuy
Durham is a little sketch at times...thats why I prefer the nearby Crabtree Valley location.
Score: 3 Votes (Like | Disagree)
Read All Comments